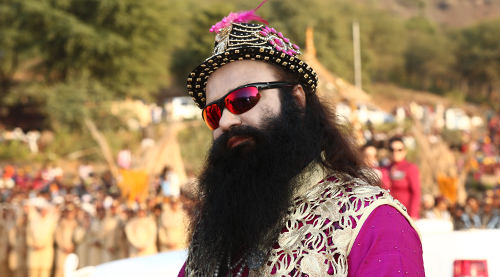 MSG 2 - The Messenger stays on to be in the news. While the film released a couple of weeks back and its success party too was held at JW Marriott last Friday, it wasn't

all fun-n-frolic for the makers of the film. It was also announced by Saint Gurmeet Ram Rahim Singh Insan that stuntmen, who have been injured over the years while shooting for various films, would

be provided medical assistance. This would be done through his personal remuneration coming from every film.

"What makes it special is that this isn't only for those who may have met with an injury during the shooting of his own films, but even the ones from other films," informs our source, "He feels

that it is about time such injuries are acknowledged and assistance is provided. A stuntman depends on his body for his living. If he meets with an accident, there is immediate threat to his

monthly earning. At times, it is tough to even survive hand to mouth. The Saint feels that one can't just lend token support here. Instead, there needs to be sustained assistance and it is his duty

as an industry person as well as a humanitarian."

The first benefactor of the scheme was announced as Vidya Shetty, a stuntman who was paralyzed waist-down in 2001. With close to decade and a half ever since he met with an accident, there are

continued needs that he faces.

"The aid was announced at a small low key event which was attended by senior stuntman Ram Shetty and his son Anand Shetty. They were present on behalf of the ailing stuntman," the source adds.

Fortunately, it is a good trend building in the industry. While Akshay Kumar and Nana Patekar have already come out in support of the farmers and Salman Khan continuing his charitable endeavor with

Being Human, this initiative by Saint Insan is a step in the right direction as well.

Hope others from the industry pick a cue from this and spend money on a good cause.