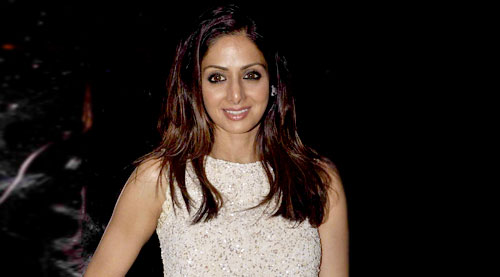 The stunning Diva Sridevi chats up with Subhash K Jha about her new film Puli.

We last saw you in the life-changing English Vinglish. What prompted you to accept a Tamil film?
There were offers. But I decided to do Puli because it seemed like the right project to do, something completely different from English Vinglish.

“Puli is a hardcore massy film; I hope audiences like it” – Sridevi

But what made you choose this?
It has to be something that instinctively catches my attention. At this stage of my life I don't need to go out and work unless it's something that I am enthusiastic about.

Did you expect English Vinglish to make such an impact?
Never! I could never imagine it would connect in such a way with people all over the world. It's a life-changing film.

What has been the most fulfilling part of doing English Vinglish?
That my daughters were a part of my life when it happened. Of course they had seen my films on television. But this is the first time I did a film that they saw happening.

So your daughters finally acknowledged your brilliance?
(laughs) That I don't know. But they liked what I did in English Vinglish. For me that was the greatest happiness.

So what grabbed your attention in Puli?
It was the whole ambience of fantasy-adventure. I haven't done one of those for a very long time.

You had done Chandramukhi with Salman Khan?
Which one? Oh yes! Chandramukhi was partly a fantasy-adventure. But not entirely. This one takes us fully into the genre. I wanted to do something like this. I've made my choice. Now it's up to the audience to decide whether they like what I've done.

We love what you do even in the crass K Bapaiah, T Rama Rao films you did in the 1970s?
(laughs) They are all important to me.

Tell me about the princess' part in Puli?
I play this mysterious royal character. We don't really know what she's thinking. She has different shades to her personality. Her mood changes suddenly and so fast, it's hard to know what's going on in her mind. She is sometimes quiet, sometimes very vocal and bitter. I enjoyed playing the character.

What was it like doing a Tamil film after 29 years? Was the language a problem?
Why should it be a problem? I've done numerous films in Tamil in the past. I've spent a major part of my life in Chennai. I was born and brought up there. Even now I often go to Chennai. I've relatives and friends there.

But do you get to speak Tamil at home in Mumbai?
No I don't. And that's something I miss. Unfortunately my daughters don't speak in Tamil. But I've my Tamilian staff whom I talk to in the language. Though my mother-tongue is Telugu I've spent most of my life in Chennai and Mumbai.

So what after Puli?
It all depends on the offers I get. If I like something I may do a film immediately. If nothing inspires me I may stay away for five years.

God forbid!
(laughs) Well, pray that I get something I like.

Any films that you liked lately?
I loved Tanu Weds Manu Returns, Queen and earlier I loved Barfi. Priyanka Chopra was superb in that.

Priyanka reminded me your performance in Sadma?
No way! She did it all in her own way. While watching Barfi I didn't even think of Sadma. Priyanka did a marvelous job.

Any dream role left for you?
I can't think of any role that I dream about now. But yes, my character in English Vinglish was something I could have never imagined playing. It just fell into my lap. And the experience of playing Shashi Godbole was so beautiful.

But surely there is somebody you'd like to play? I know many actresses who want to play you?
Ha ha, really? There is no end to the characters whom I can play. I am sure there are many beautiful characters waiting for me to be played. If you ask me what I want to play now I'd say any role that I haven't done before.

People are comparing Puli to Bahubali?
I haven't seen Bahubali. But I heard so much about it. I feel it's not fair to compare the two. Puli is a hardcore massy film. And I hope audiences like it. And I hope I don't disappoint my fans.