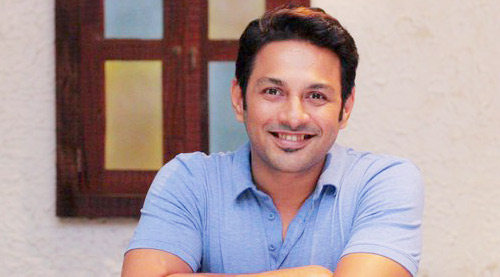 Ram Gopal Varma's Satya and Hansal Mehta's Shahid, has now written the script for Hansal Mehta's highly lauded Aligarh about a real-life professor who was humiliated and sacked

for being a homosexual. In this interview with Subhash K Jha, Apurva while coming out on his sexuality explains what it means to be gay in India.

First things first, in a country that forbids homosexuality by law, how and why did you think of writing a screenplay on a gay theme?

The 'gay' theme came second. The first thing that struck us was the horrible Human Rights violation. A senior academic & poet was stripped off his dignity when some camerapersons broke into his

house and filmed him in his private moments without his consent. He was then further humiliated by his university and was forced to fight for his dignity.

You seem completely moved by his plight?

The man was 64 years old when this happened and he struggled to find the internal reserves to fight. This could happen to you or me. It can happen to anyone who dares to venture out of these

archaic prescriptions of morality. For example, the much discussed law, section 377, is as dangerous for heterosexual couples as it is for homosexuals. As per the law, even kissing or other forms

of oral sex make you a criminal in the eyes of the law. It was important to tell this story and highlight the vulnerability of our society.

What attracted you to the real-life incident of the professor in Aligarh?

The fear that this could be me or someone I care for. The alarming realization that I am not safe in my own house, in my own bedroom. This attracted me to the story. Besides, I had been on a news

debate in 2010, the day Professor Siras was found dead. The debate questioned whether change in laws and legislature was enough to change homophobic mindset of society. The debate left me with more

questions than answers. Then one day, Ishani, a young girl from Delhi sent Hansal an email suggesting he make a film on the professor. Hansal called me and asked if I wanted to write it. I jumped

Did you at any time wonder how the film would get made in a country where homosexuality is prohibited by law?

No, because Hansal Mehta is making it. He is a man of rare courage and commitment. Getting the film made is not difficult for him at this stage of his career. He proved with Shahid that he

was not afraid to speak the truth. Also, our audience has begun experimenting with cinema. The acceptance of a character-driven narrative like Piku is very encouraging, and ours is also a

But what about Section 377?

About homosexuality being prohibited by law, this film is not meant to titillate audiences. It talks of your basic constitutional right to your privacy and dignity. It is a case that was fought in

the High Court during a time when Homosexuality was legal in the eyes of the law. It is a case that Professor Siras won and it is based on data collected from that case. So it's all above board in

the eyes of the law.

Did you agree with Hansal Mehta about the selection of Manoj Bajpai as the correct choice for the role?

Manoj Bajpayee and I go back a long way. We were both struggling to find a foothold in the industry during the making of Satya, a film that gave us both our identity. So I was thrilled to hear that

Manoj was to play this role. But there was also a period when I thought Manoj wouldn't accept the role. I thought he would be reserved to give his all to Siras's character.

Manoj is not afraid to take risks?

You see many successful actors go into a safe zone. They are afraid to turn the moral compass and play characters that their audience may reject. Manoj has been successful in both art-house and

mainstream, so I thought he might play it safe. But the day I saw the 'look test' of Manoj as Siras, I broke down crying. He had in that one still frame internalized a very beautiful and complex

character that I had struggled to write. He has done so well that I find words inadequate to describe it.

It is very difficult for a heterosexual to play gay. Do you think Manoj has managed it?

I believe that deep inside, we are all capable of homosexual and of heterosexual feelings. After all, it is about connecting with another soul, and we respond to touch and to emotions, irrespective

of the orientation. But yes, as we grow up we follow the rules of society and make strong choices, sometimes suppressing our true feelings.

I am still amazed at Manoj's performance?

Manoj has tapped into his subconscious and found this grey area of sexuality; he has found the heart of Siras. I have met several older gay men, lonely in their golden years, and Manoj has shocked

me with his understanding of these people. I believe that he has given an astute and flawless performance. But the greatest triumph of our film thus far, is that audience is falling in love with

Siras. They adore him, they laugh with him, they cry with him. This is a first for a gay protagonist in our industry.

How homophobic do you find the film industry?

Our film industry like most movie industries in the world employs a sizable number of gay and bisexual men & women. Some of these filmmakers, actors and technicians are known for their attention to

detail, while others create dynamic female characters. Many do song and dance with great aplomb. While all of this is wonderful, it has a flip side. Owing to outdated ideas of morality, and also

criminalization of same sex unions, most of our filmy gay folk are closeted. Some get married early and avoid questions; others stay single but create smokescreens from time to time, always

worrying that they will get 'exposed'. This gives rise to a kind of homophobia, where as they will not associate openly with an 'out' gay person for fear of being discovered by association. This

also ensures that they create gay characters in films that either ridicule themselves or are there only for villainous purposes. This continues the vicious cycle of homophobia in society.

There are many gay personalities in the entertainment industry. Barring Rituparno Ghosh and Onir none of them are willing to come out. Does that not defeat the very purpose of an honest artistic

Well, you can't blame them entirely. There is a fear of being jailed for something you did quietly in the privacy of your bedroom. It's really unfair. Plus we belong to a society that is quick to

slot us, to label us. If you think Rituporno or you think Onir, the next word you think of is gay. In spite of them being talented filmmakers, their claim to fame has become their homosexuality.

That is tragic, as there are so many shades to these personalities.

Most filmmakers, including myself have chosen to remain in the closet for fear of being slotted unfairly. But today, with Aligarh, I have a great role model in Siras. He stands for so much

more than his sexuality. He stands for great academic credentials, for lovely poetry, for a pure heart, for courage and for empathy. After 20 years of giving my all to the industry and after making

a respectable name for myself, I feel comfortable to say that I'm gay. It liberates me from the constant fear of being found out. And I have faith that our society can look beyond labels and have a

Do you feel society at large needs to take a mature view of homosexuality before it is legalized?

It is happening. The support we have got for Aligarh has been overwhelming. People who were never comfortable talking about it are now discussing it on various platforms. It is important to

understand that by suppressing ones true nature we will create a society of hypocrisy and of bitterness. I think the change has begun and I'm willing to stick my neck out for this.

You've been in the industry for many decades now first as a very fine editor and now a screenwriter. Do you sense a change in the moral dynamics of the entertainment business?

Oh yes. I have seen the change from absolute fluff to brave storytelling and remarkable characters. There is room for all kinds of cinema, including that which holds a mirror up to society. These

films might not all become Friday box office blockbusters, but they become honest testaments to our times, finding its audience over years to come. Shahid is still so popular on Netflix and

we get awestruck emails from people every day. A big studio like Eros, which thrives on popular cinematic fare, has also produced the dark and twisted Badlapur and now Aligarh. If

this is not a sign of changing moral dynamics, then I don't know what is.