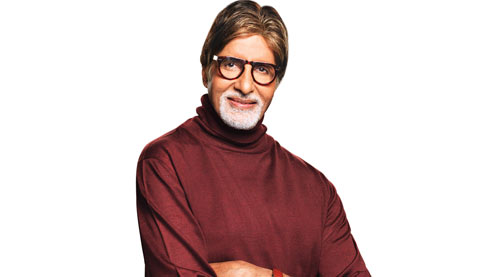 It rarely happens that I get to attend a film event that leaves me richer because of the goldmine of experience. I attended one such function today where Mr Amitabh Bachchan along with TE3N producer Sujoy Ghosh and director Ribhu Dasgupta interacted with Vishal Dadlani in front of a select group of senior journalists. There was no cacophonic clutter of video or still cameras. There was a giant personality in Mr Bachchan who took every question (from Vishal as well as the journalists) with utmost seriousness and respect. He peppered the conversation with his fragrant sense of humour and genuine modesty. He shared unique insights into the making of TE3N and answered numerous queries on his phenomenal journey.

It wasn't easy for Ribhu Dasgupta to convince Mr Bachchan to let go off his beard in TE3N but when Big B was convinced that it is really needed, he snipped it off. It resulted in some of his advertisements being shifted by one and a half months. The promos show videos of John Biswas' granddaughter which were shot by Mr Bachchan himself on Go Pro camera and also on an iPhone. A scene had to be shot of Big B driving his scooter. The cameras were hid but Mr Bachchan drove a really long distance so that there's naturalness in the scene and no one obstructs the shoot due to retakes. The scene was shot in Kolkata but Mr Bachchan gave a reference that if the cameras were hid in Marine Lines, then he must have started driving the scooter from Juhu, stopping at red lights, ensuring no one recognises him to create a logistical hazard.

Mr Bachchan shared gems of information from his personal and professional life. It was truly a privilege to listen to him. After all he's the man whom we've idolised for the longest possible time. The fact that a man can keep on redefining entertainment and Art, the fact that he's determined to stay hugely relevant under all odds is inspiring to varied generations. I couldn't record what he said but I'd share a few important points that I managed to scribble on my mobile.

Mr Bachchan said that he would never want to be satisfied because being satisfied is the end of creativity. "Satisfaction is a full stop for creative people," he said. He emphasized that it is important to rehearse well before actually shooting. "It is Important to know the lines of your co-stars. There's nervousness when you have co actors like Irrfan Khan, Nawazuddin, Vidya or Deepika. We have to be on the toes," Big B said. When chided by a journalist that why does he have to be on the toes in front of the more recent actors when he has a phenomenal body of work, Mr Bachchan replied that it is important to be on the toes for him because when he looks back at his work after a few years he should feel that, "Yes I did it right. I shouldn't feel I made mistakes."

Mr Bachchan said that there are times when people praise him that they like it when he walks stylishly with left shoulder slightly drooping. He said that his ligament is torn in the shoulder and because of which he can't lift it up for too long and hence the droop. For Sharaabi, he said that people liked the fact that for many scenes his hands were in his pockets in a stylish manner. "A bomb had blown in my hands during Diwali and the skin was all out and hence to hide it my hands were inside the pockets for many scenes," he said. Even for TE3N there's a scene where Big B is having hands inside his pockets but the reason for that was that his pant was loose and he was actually holding it back by keeping his hands in the pocket.

The humility of Amitabh Bachchan is legendary. And it is not a pretence. He's incredibly self-effacing. As is well known, Mr Bachchan started his professional journey in Kolkata. He revealed today that even now when he visits Kolkata, he meets his colleagues and bosses. So what do you call gentlemen who were your superiors then? "I call them Boss, what else will I call them," he replied promptly.

A journalist asked Mr Bachchan that during the filming of any film, if he realises that the director has lost his way and things are not going as per the plan, how does he deal with it? "Director is the captain of the ship. You have to be humble and polite with him. Once you've dedicated yourself to a project and said yes then you have to believe in it all the way." Another journalist said that people have known Big B for his angry young man and macho image for most parts of his career, how did he feel while playing a weak defeated character in TE3N? "To be ordinary in front of the camera is tough," replied Mr Bachchan. I guess that's the best quote to end this write up for you can never deconstruct Amitabh Bachchan totally. He's full of surprises. Hope he continues to keep surprising and more importantly...inspiring millions of people all across the world! I met a miracle man today and I am glad I could share a few of memories with you guys.