From Army to bodybuilding to acting, Bhutanese citizen Sangay Tsheltrim is a believer of one never knows what they are capable of unless they try. For those who have watched superstar Salman Khan’s latest outing- Radhe: Your Most Wanted Bhai, Sangay’s evil character Lota is unmissable. One film old in Bhutan, Sangay reveals that he landed the film after an hour-long chance meeting with Salman Khan on the sets of Dabangg 3 in 2019. At that time, all that Sangay wanted was a picture with Salman Khan. However, little did he know that the elaborate fan meet would pave the way for his big Bollywood debut. 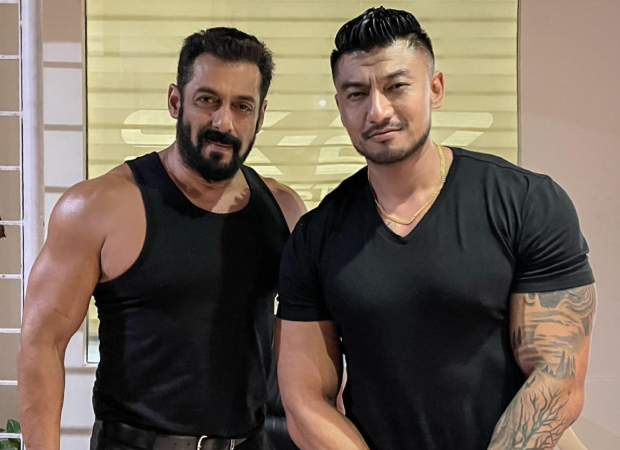 After the release of Radhe, Sangay spoke to Bollywood Hungama about his journey from the army to serving the King of Bhutan to winning laurels for the country in bodybuilding to becoming an actor and producer, and now his entry in Bollywood. “I was in the army before and I was also a very passionate bodybuilder. I wanted to compete for my country internationally. I was serving his majesty the King and the members of the royal family which is a rare opportunity in Bhutan. In 2013 I resigned and in 2014 I got my first bronze medal in Macau in the Asian championship. In 2015, I got my Gold medal from Uzbekistan and in 2016 I defended my medal. Then in 2017, I won the title of Mr. Bhutan and I went for world championships where I came fourth.”

Later when he thought he was done with competing, he opened the biggest gym in Bhutan named Muscle Factory. “I invested my money in the gym and I wanted to provide it with minimal fees so that everybody could use it. While I was competing, my friends told me that I have all the talents to be an actor in Bhutan. In 2018, I finally decided that let me just give it a try. You never know in life unless and until you try. That’s how I did my first action film. I was also a co-producer for the movie. The movie did really well it became a blockbuster and I got the best debut male award in 2018 February,” he added.

For his second film, Sangay wished to collaborate with his filmmaker friend Haider Khan and flew to Mumbai to meet him. “Haider took me to the sets of Dabangg 3 as he had some work. I was not even expecting to meet Salman sir. He said if Salman sir is free you might get a chance to meet him. Luckily, it was a night shoot and his friends were not around there. Then when he came to rest in the tent after giving his shot, I got to meet him and Salman sir was so nice to me. We spoke on common subjects, especially bodybuilding. We spoke for one hour. When he had to leave, I asked for one picture. He agreed. After two months, Haider called me and said Salman sir has remembered you and is giving you a role in his movie. So I came here and met the director and that's how it happened. It was all Salman sir and he didn't even know whether I can act or not also," he recalled.

When asked if he took tips from co-actors on the sets of the film, Sangay says, “I don't want to praise myself but when I am given a task, whether it is acting or anything, I give 101%. Luckily, the first scene was my action scenes. It was very easy for me. Prabhu Dheva sir praised me, action director praised me. So after that when I had to deliver my dialogues, I was quite nervous. So the whole night, I practiced my dialogues about 30-40 times. The next day I did it in the first take and Prabhu sir was so happy, he told Salman sir, and he also praised me after seeing my take on the screen and he said ‘Sangay you look fabulous and fantastic’, so that encouraged me a lot.”

Both Salman Khan and Sangay are fitness enthusiasts. When asked if the two bonded over fitness during the shoot, Sangay was all praise for Salman’s dedication to fitness. “I have seen him work out twice when I went to meet him. One was on the sets of Bigg Boss. In Bigg Boss set, he got a room where he has a gym. Once in Bandra, in his office. So I was there when he was working out and I told sir, which I am telling you honestly he has so much energy and so hardworking. He was working out for more than an hour. I work out only for 45-50 mins. My style of working out is different and his style of working out is different and it is more tiring. So I asked him how you do it and he said, ‘Sangay, I have to work out. Now I have to compete with these young guys. I am no more young. I have to work hard and match with them’. That inspired me.”

Speaking on what kind of roles he looks forward to, Sangay said, “Whatever comes, if it is good, interesting, then I will definitely do it. You should always capitalize on what comes to you. I did get a couple of offers before Radhe was released. A lot of casting companies approached me and gave me some offers and roles. Few of them I didn't like. I said I am not going to do this kind of movie. Because they didn't know I did Radhe. I said if there are better roles then let me know.”