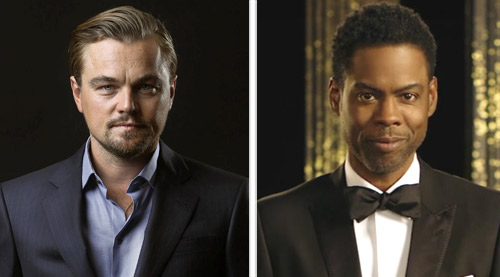 "Climate threat is real. It is happening right now. It is the most urgent threat faced by our entire species," said Leonardo DiCaprio after winning the best actor award for The Revenant at the Oscar Awards held a short while ago. This was the fifth nomination for Leo and everyone had been rooting for his spectacular performance. "I stand here today as a proud gay man and hope we can stand together as equals one day," said Sam Smith after winning the award for best original song 'Writing's On The Wall' for Spectre along with Jimmy Napes. Sam said that he was told that anyone who has openly admitted to being a gay has never won an Oscar. Things changed this year.


Lady Gaga put up a spirited performance on 'You Won't Know How I Feel Till It Happens To You' from the movie The Hunting Ground that earned her a standing ovation. The song was preceded by a surprise entry of US Vice President Joe Biden. Both Biden and Lady Gaga stood up for sexual abuse. Colin Gibson dedicated his Oscar for best Production Design for Mad Max: Fury Road as the first Oscar for Diversity since many people from many countries collaborated on the production design of the film.


It is great to see artistes espousing the causes close to their heart by using an enormous platform like Oscars. A few Bollywood actors can learn a thing or two in genuine intent and using the right platform to voice legitimate opinion instead of irresponsible and rabble rousing tweeting and statements.


Desi girl Priyanka Chopra made heads turn in a white Zuhair Murad gown. She looked confident on the red carpet and when she presented the award for best editing along with Lieve Schreiber, it was clear that Priyanka has arrived on the big stage and 'Quantico' has ensured that everyone knows and respects her. Sylvester Stallone was the sentimental favourite for winning best actor in a supporting role for Creed. He was beaten by Mark Rylance who deservedly won for Bridge of Spies. Arnold Schwarzenegger posted a video message stating that for him it was Sly who deserved to win all the way.


Chris Rock the host for the evening was a hit. People loved his smart alec jibes at the entire diversity debate and how none of the black actors had been nominated for Oscars this year. "Welcome to 88th Academy Awards, the white people's choice awards," he started the evening with a loud guffaw from everyone. He was consistently funny and took several potshots at black people and even himself. "It is not about boycotting or anything. We want opportunity. We want Black actors to get the same opportunities," Rock said. "Diversity is essential for our salvation," said Louis Gosset Junior. Several presenters for the evening were black and it seemed there was a deliberate attempt to do a cover up.


Amongst the winners, Mad Max: Fury Road won six Oscars and literally swept most of the coveted technical awards. The best picture award went to Spotlight which is very well deserving. To make a film on the evil of child sexual abuse perpetrated by some Christian Priests based on actual incidents was a bold subject and deserves an applause. Can we make a film like this in India today? There's a big question mark on that!


Dave Grohl paid a touching tribute to the members of the film fraternity who passed away in 2015. One name was that of a Public Relations executive. Bollywood film awards need to take a note of this." Mad Max: Fury Road is a film that we see through our ears," said Mark Mangini, the winner of best sound editing. A notable quote for sure.


Asif Kapadia, the British filmmaker of Indian origin, along with James Gary Rees won the Oscar for best documentary feature for Amy. The award for best Documentary short film was won by A Girl In The River directed by Pakistani filmmaker Sharmeen Obaid Chinay. It is a documentary on honour killings of young girls in Pakistan and how after this documentary things are changing to an extent.


Watching the live telecast of Oscars is a riveting experience. There is a lot of system in place and everything is organized. There were no goof-ups. I'd say that I have had better Oscar watching experiences before but this year was pretty good too. And thank God, Leo has finally won. I can hear a collective gasp on that one.