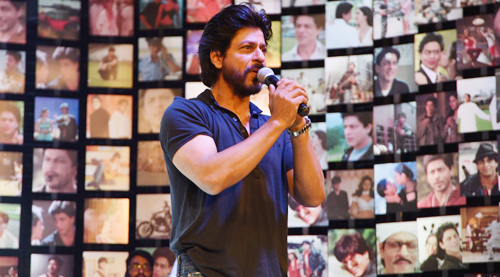 "Shahrukhiyat nikaalne ki koshish ki gayi hai 'Fan' mein," said Shah Rukh Khan at the theatrical trailer launch of the Maneesh Sharma directed film at an open air spectacle at YRF studios a short while back. SRK was referring to how Maneesh has completely tried to break the norms that are expected from a film starring him. Let's talk about the theatrical trailer first of all.

The theatrical trailer of 'Fan' is a complete surprise. If the teaser and posters had promised something, the theatrical breaks the myth of fanhood completely. It looks like a very engaging tale of a fan who starts thinking that he owns his favourite star whereas the star has other priorities. There's a lot of thrill and more importantly there's a lot of substance. Shah Rukh Khan has been presented in a completely unique and different way. Most importantly the promo succeeds in instilling an enormous curiosity that you wish to see the film, at the earliest. It is always a very good news for any film.

The 'Fan' promo launch was a brilliantly organised event with over 4000 fans clamouring and shouting with a drone camera capturing the mayhem and the madness. Shah Rukh Khan sang songs, shelled out dialogues from his films (including the forthcoming 'Raees'), indulged in fun bantering, clicked selfies and unleashed quotable quotes the way only he can. Let us give you a few notable quotes from SRK today


* I've never been bothered about how I am. My stardom has to be worn like a T shirt not a Tuxedo.

* Writing letters in blood is a no no. Send an email or tweet.

* The only connection I have with the fans is through the social media. I don't give clarifications on social media. It's a very important mouthpiece.

* I asked Maneesh to have some item songs but he refused...there's only one song in 'Fan'.

I asked Mr Khan that considering he faced some protests during 'Dilwale' and there were places where it was forcibly stopped and since he's a tax paying citizen, so will he make a appeal to the authorities well in advance so that there's no repeat of what happened earlier. SRK replied that the only time he appeals is during cricket matches and sometimes the freedom of expression is in Silence.

In the recent past, SRK has had some bad experiences during the shooting of 'Raees' in Gujarat and also during the 'Jabra Fan' launch in Delhi. But the Shah Rukh Khan I witnessed today was completely at ease, relaxed and jovial like he always is. The best way to shun negativity is by spreading more and more love and that's exactly what SRK did today. The screaming fans at YRF and millions all across the world are rooting for him. The positivity will surely win!

'Fan' is carrying excellent reports and the theatrical trailer is being unanimously loved by fans and critics alike. We've seen it in the past that the movies that carry great word of mouth tend to have long legs at the Box Office. Most importantly, 'Fan' looks like a film that SRK may be extremely proud of twenty years down the line when he evaluates his filmography.