Karan Johar's chat show Koffee With Karan is in its sixth season and is already making a lot of headlines for the revelations the celebrities have made on the show. Katrina Kaif and Varun Dhawan graced tonight's episode and the audience got to see a new side of their friendship for the first time on camera while they have known each other since Katrina shot for her debut film, Maine Pyaar Kyun Kiya. 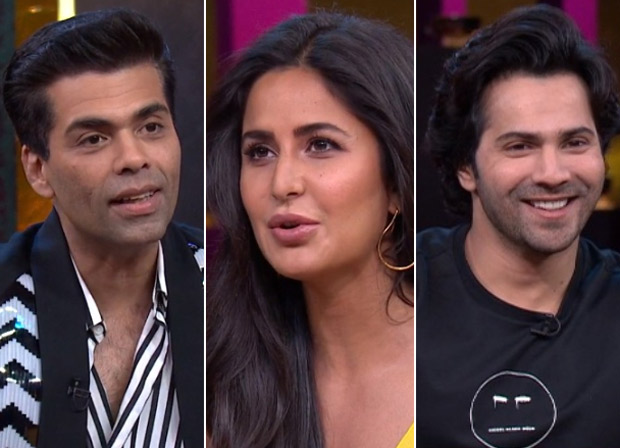 Varun Dhawan, as usual, looked super pumped to be on the show as we finally got to know whether he really was a part of Katrina hate club which had him and Arjun Kapoor. If one would remember, last season Katrina revealed that when she was very new to the industry and dating Salman Khan, while Arjun and Varun were assistant directors at the time. One day, she was walking with Salman Khan and she didn’t give enough attention to both the boys who were with them at that time. Since then, they started ‘I hate Katrina’ club. Cut to 2018, when asked about the same, Varun Dhawan revealed that she got it all wrong as they wanted Salman Khan’s attention and not hers. Salman would take them for hiking, gave them a lot of attention. But, it all changed when Katrina came into the picture and that really bothered them. Katrina was left in shock as the boys weren't doing this for her attention but for Salman's attention.

Speaking about dating, it is known that Varun Dhawan has been dating designer Natasha Dalal for a couple of years now. But, he never spoke about it until now. Even in the last couple of seasons of Koffee With Karan, he has chosen not to speak about his relationship as she isn't from the industry. It was only this year when they finally made their first red carpet appearance at Sonam Kapoor's wedding. Just this week, Varun made it Instagram official on Diwali night with Natasha. Now, in today's episode, Karan asked Varun about his dating life stating, "Are you saying that you are dating Natasha Dalal?" To which, he responded saying, "Ya, I am saying this!" When asked about his marriage plans, "Do you plan to marry her?” Varun's response was, "Yes." Finally, the confirmation the fans needed from Varun.

Moving onto Katrina Kaif and the equation she shares with her ex Salman Khan. Karan talked about how fans have wanted them to get married. She said that it is understood why everyone thinks of it as they have worked together in so many films and are also unmarried stars. So, it is bound to happen.

Bringing back to the first episode, Alia Bhatt and Deepika Padukone had admitted that there wasn't any awkwardness between them due to Ranbir Kapoor. Even with Katrina Kaif, they go to the same gym and Alia said that things were fine between her and Katrina. Speaking of exes, Karan also asked Katrina about how she has managed to keep a healthy friendly equation with Alia Bhatt even after knowing that she is dating Ranbir now. "It wasn't and isn't tough. Everyone has to judge for themselves and how they want to handle their equations and their relationships in their life. My equation with Alia is independent, my equation with Ranbir is independent and my equation with Deepika is independent. These are all individual equations I have. We are not everyday phone call conversation buddies. But, I like who she (Alia Bhatt) is. There's a certain enjoyment factor, enjoyment of each other's company and sort of comfort and fun element when we are together. And it was just the decision I made. I respect and value that relationship and it shouldn't change for anything."

In the episode, Varun Dhawan was literally moved to tears when he was shown video messages from his parents Lali Dhawan and David Dhawan. They both talked about how he was a naughty child but has grown up to be a hardworking individual. Varun admitted that he only gets emotional when his parents are proud of his work and when he sees his older brother Rohit Dhawan play with his niece. Katrina Kaif received a video message from her close friend Salman Khan as he kept making fun of her but appreciated how determined she is to get the work done.

During the rapid fire round, Varun was blunt about never wanting to exchange his career with Ranveer Singh or Ranbir Kapoor as both the actors had seen failures in their careers. He also said that he would never go to them for relationship advice as well. Katrina talked about what she loves that Alia is a free-spirited person and slightly evolved, hates that she doesn't seem to put a whole lot of work behind being very good and that she doesn't seem to put a lot of effort in the gym but looks really good. She also said that she would love to be locked in a room with all of her exes.

All in all, it was a fun episode featuring Varun Dhawan and Katrina Kaif who showed a new side to their friendship to the audience. Next week, the father-daughter duo Saif Ali Khan and Sara Ali Khan will be making their appearance together.