Koffee With Karan season 6 is currently in its final phase. Only a few episodes are left before Karan Johar brings the most awaited finale episode featuring Priyanka Chopra and Kareena Kapoor Khan. Meanwhile, critically acclaimed breakout stars Rajkummar Rao and Bhumi Pednekar made their debut tonight on KWK and it was all fun and games. 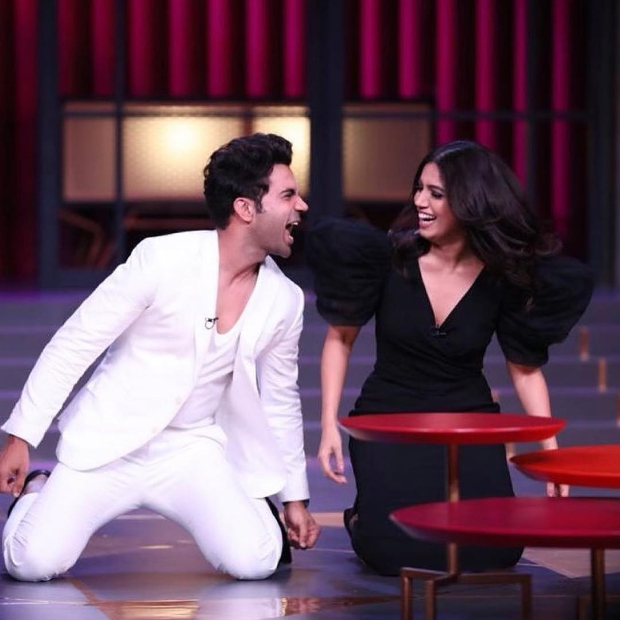 Here are some of the interesting revelations the two stars made:

1. Bhumi Pednekar revealed that she was YRF's casting director Shanoo Sharma's assistant when she auditioned for Dum Laga Ke Haisha. She was already over 80 kgs and had to put on 94 kgs weight for the role.

2. Rajkummar Rao talked about his journey from starring in Love, Sex And Dhoka to 100 crore hit Stree. He said not much has changed in him but people have started noticing and giving him work. He revealed that he is a trained martial artist and not many people know about it.

3. It is a known fact that Rajkummar Rao is a huge fan of Shah Rukh Khan. He said if he had a chance to do any of SRK's roles, it would be from Kabhi Haa Kabhi Naa.

4. Rajkummar Rao even talked about his eight-year relationship with CityLights actress Patralekhaa. When asked about why they aren’t getting married yet, he said, "Honestly, I am not ready to get married yet. We are in a very happy relationship and we are very happy about it. And our parents are not complaining, so there is no pressure to get married. And I think both of us are just busy in our respective careers. Marriage is, not that we don't believe in it, just that right now we don't think it's the right time. It's a mutual thing."

5. When asked whether she has been insecure about him with any of his female co-stars, Rajkummar said, "There have been times she has said, 'Dekho, zara isse sambhal ke rehna'. She is a very broadminded girl. She was brought up in Shillong. They have a spectacular culture. She is a bong from Shillong. But, nothing serious as such. We are best friends actually. I think it's a great thing when your partner is your best friend. You would love to come back home and spend all your wonderful time with your partner. You can share everything - you can have fun, dance, sing, go out to watch a film. It's not about those lovey-dovey talks. It's about discussing everything in life. 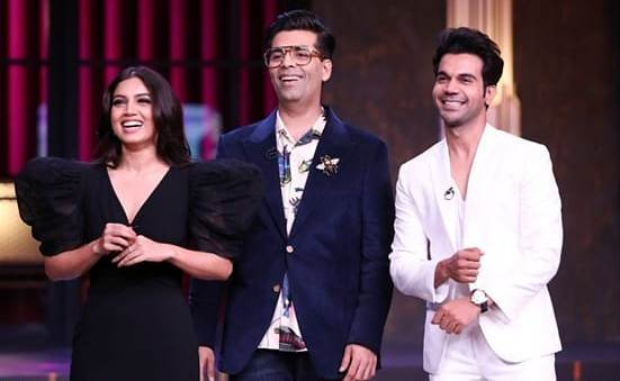 7. During rapid fire round, when asked whether she had a crush on a co-actor, she said yes. But, when asked whether it was Ayushmann Khurrana (Dum Laga Ke Haisha, Shubh Mangal Savdhaan), Neil Bhoopalam (Lust Stories) or Akshay Kumar, she did not reveal the name. But, she did agree that everyone would drool over Akshay's fitness during Toilet – Ek Prem Katha.

8. Bhumi said that she was to be paired opposite someone for an extramarital affair, she would pick Vicky Kaushal. But, she was asked to choose between Vicky and Ayushmann Khurrana as the most talented actor, she chose the latter.

9. One actor Bhumi would love to have a link up rumour with is Aditya Roy Kapur. She said, "I think he is very cute."

10. During his rapid-fire round, Rajkummar Rao confessed that if he wasn't dating Patralekhaa, he would take Deepika Padukone on a dinner date.

All in all, it was a fun episode with Bhumi Pednekar taking away the Koffee Hamper and Rajkummar Rao winning the game round. The next episode will see the two handsome stars Aditya Roy Kapur and Sidharth Malhotra.

ALSO READ: Koffee With Karan 6: Bhumi Pednekar gets competitive to win the hamper, Rajkummar Rao says he would like to be paired opposite Karan Johar if essaying gay character