Katrina Kaif, who was recently seen on Koffee With Karan 7, is gearing up for the release of the horror-comedy Phone Bhoot with Ishaan Khatter and Siddhant Chaturvedi. The actress recently met up with her mother and brother as the trio attended Founders Day at the Mountain View School in Madurai. The actress not only posted photos of her bonding with the kids but also shared videos of her dancing with them on social media. 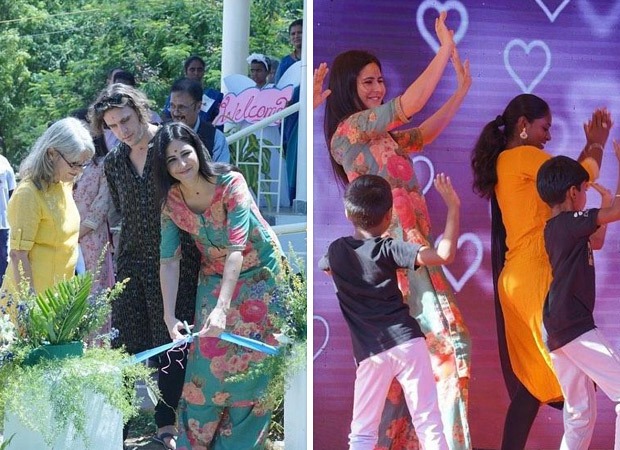 Taking to Instagram, Katrina Kaif posted a series of photos featuring her dancing with kids and also posing with the staff of the school. There was yet another photo showcasing the actress attending the ribbon ceremony as they opened classrooms in the school. Speaking about the experience, Katrina penned a lovely note on Instagram along with the photos and videos saying, “Celebrating Founders Day On Saturday, we at Mountain View School held a celebration of life for our founder who passed away last year. The Performances by teachers and children, along with some special guests made this such a special time. We also inaugurated three new classrooms, thanks to donations from benefactors.”

The actress went on to add, “Following out 2021 fundraiser. Am always so proud to see the amazing work by my mom here at the school , along with my brother sebastein who has spent the last year helping along side my mom , it’s a truly beautiful school.” Many of the friends of the actress’ friends appreciated the gesture and dropped their comments on the page. Ranveer Singh, Anushka Sharma, Bipasha Basu, Tahira Kashyap as well as Kaif’s husband Vicky Kaushal dropped hearts on the page whereas Hrithik Roshan commented on it saying, “Amazing”. On the other hand, Ileana D’Cruz, who is expected to be dating Katrina’s brother Sebastian also commented on it saying, “Awwww that’s just lovely.”

On the work front, besides Phone Bhoot, Katrina Kaif has Merry Christmas with Vijay Sethupathi in the pipeline. The actress is also expected to start work on Jee Le Zara which also stars Alia Bhatt and Priyanka Chopra.

Also Read: Vicky Kaushal and Katrina Kaif team up for their first-ever joint collaboration with Cleartrip