Kareena Kapoor Khan is currently in London shooting for her next. Whereas husband Saif Ali Khan is in Mumbai, taking care of their two sons. The actress has been busy shooting for the film for the past couple of weeks. And now, she has reportedly wrapped up the film. The actress, who is quite active on Instagram, posted a series of photos post her wrap up, on her official social media page. 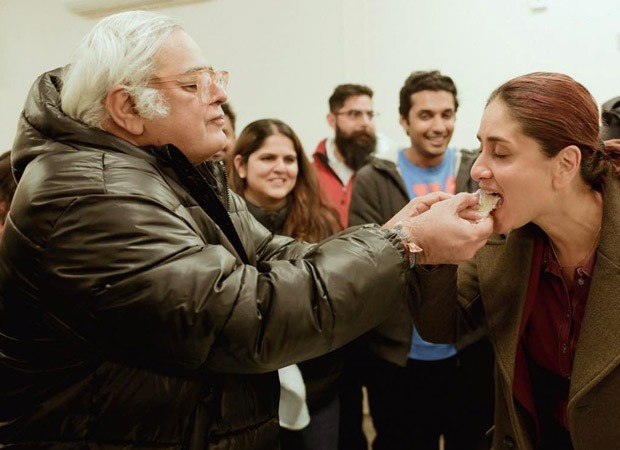 Kareena Kapoor Khan wraps up her next with Hansal Mehta in London; shares photo with ‘Best Team Ever’ clapboard

In the past week, Kareena Kapoor Khan shared many glimpses of her next with Hansal Mehta. While the film is yet to be titled, reports suggest that the actress will be seen in the role of a cop. In the latest post shared by her on Instagram, Kareena revealed that she wrapped up the schedule of the film. In the series of photos posted by her, the first one featured her posing with a clapboard that read, ‘Best Team Ever’. Followed by that was another photo of her taking a bite of the cake from the wrap up bash and the final photo featured her posing with the massive team of the film. She posted it saying, “As they say it’s the journey never the destination…make it worthwhile…?? @hansalmehta @balajimotionpictures @mahana_films.”

On the other hand, Hansal Mehta too shared another set of photos from the wrap up, saying, “Mazaa aaya! Special team complete a special shoot for a special film.@kareenakapoorkhan @balajimotionpictures @ektarkapoor @mahana_films”

The filmmaker took to the social media platform to also share some special moments from their London shoot schedule saying, “As we begin to wrap it’s time to thank some brilliant people who’ve helped make this journey memorable. Not all of us are in these pictures and many who I might not have tagged but you know who you are and you know that I’m grateful.” In the said post, he tagged the entire team of the film, expressing his gratitude towards them.

Coming to the untitled venture, it marks the debut of Kareena Kapoor Khan as a producer and is co-produced by Ekta Kapoor’s Balaji Motion Pictures.