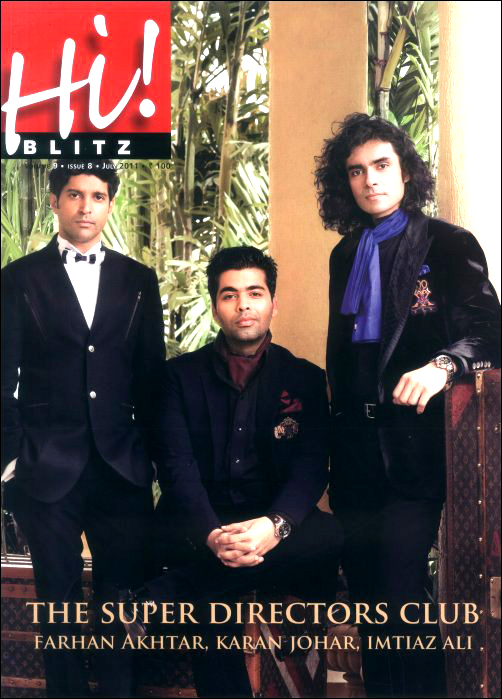 They say 'Two's a company, three's a crowd'. Proving that wrong are the creative powerhouses Karan Johar, Imtiaz Ali and Farhan Akhtar, who grace the cover of this month's Hi! Blitz.

Aptly titled as the 'Super Director's Club', this issue is not just a visual treat to watch, but also an intellectual treat! Talking about the director's fraternity is KJo says, "The film fraternity is much like a political coalition, where there exist different sensibilities. The film industry is a warring family; we are all extreme in our heads. You can't love your competition in a commercial environment, but you can like and acknowledge your competitors and envy them." On the other hand, the curly haired Imtiaz Ali, who is the name behind some of the commercial successes feels that, "I have been fortunate enough to see the people's ugly side because of money, through some personal events very early in life. I have seen some extremely rich people become a slave of riches, their success, relationships means nothing to them as much as money does." Last, but not the least is Farhan Akhtar who says, "I find it very funny when I am told that I am a role model for younger people. Because, 12 years ago, I had no idea what I'd be doing. I have worked hard undoubtedly. But it really has happened more by my love for what I do as opposed to a plan". He also adds, "Directors are competitive. They want their film to be the best film of the year, but I don't think that the rivalry stretches to the extent we notice between actors."