Actors Alia Bhatt, Jr. NTR, and Ram Charan recently went on Kapil Sharma's comedy show The Kapil Sharma Show to promote their film RRR along with filmmaker SS Rajamouli. They made the episode unforgettable with their witty banter and amusing anecdotes. They laughed at each other's jokes from the RRR set and pulled each other's legs. 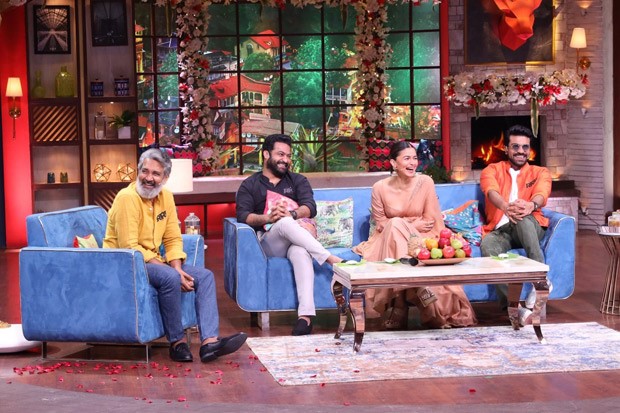 On social media right now, fresh 'uncensored' footage from The Kapil Sharma Show is trending. Alia praises Jr. NTR's cooking talents and complains that he never cooks anything for her. “Bahut accha banate hai khana ki aaj tak humko kuch nahi khilaya hai, then I believe aapko request karna chahiye ki yeh aapke liye banaye aur aapko khilaye (He hasn't prepared anything for us yet, but I believe you should ask him to do so),” Alia says.

“Sir, inka toh size zero haina, toh kaise khilaunga (Sir, she is size zero, so how can I cook anything for her),” Jr. NTR teases Alia. She laughs at his response, smacking his palm and adds, “Main agar puchungi bhi toh nahi khilayenge (Even if I ask, he won't cook for me).” In the video, Ram Charan and director SS Rajamouli can be seen seated with Alia and Jr. NTR, laughing their hearts out.

RRR was supposed to be out this week, but it was postponed due to the rising number of COVID-19 cases. In Tamil, Telugu, Hindi, Kannada, and Malayalam, the film will be released.