Praise God singer Kanye West and The Uncut Gems actress Julia Fox have confirmed they are dating. With a steamy photo spread and a first-person magazine piece, the pair revealed the news of their romantic relationship. 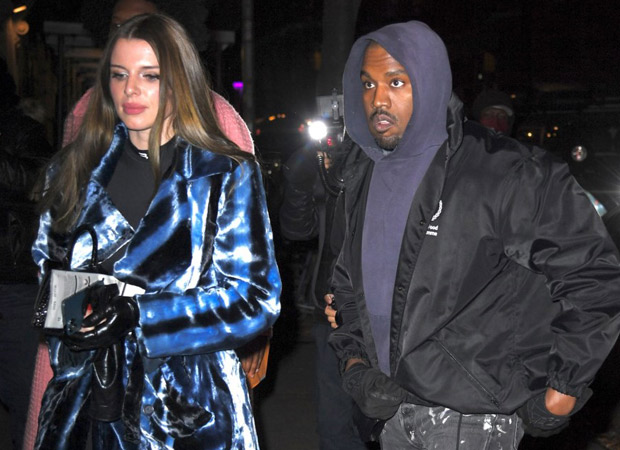 Fox, 31, and West, 44, shared their budding romance with the world on Thursday with PDA-heavy photos published in Interview. "I met Ye in Miami on New Year's Eve and it was an instant connection," she wrote for the publication. "His energy is so fun to be around. He had me and my friends laughing, dancing, and smiling all night."

"We decided to keep the energy going and fly back to New York City to see Slave Play," she wrote while sharing she was impressed with Ye's punctuality, before documenting their lavish second date. After watching the play, the pair headed to dinner at Carbone, Fox said, adding "which is one of my favorite restaurants. Obviously." Not content with just having a quiet post-Broadway meal at the restaurant, West directed an entire photo shoot starring Fox at the eatery.

West then had a surprise planned. "I'm still in shock. Ye had an entire hotel suite full of clothes. It was every girl's dream come true. It felt like a real Cinderella moment. I don't know how he did it, or how he got all of it there in time. But I was so surprised," she added. "Like, who does things like this on a second date? Or any date!"

In the images, the actress can be seen being dressed by a stylist from racks of clothing including numerous pieces from Diesel's Spring/Summer 22 runway collection from new creative director, Glenn Martens. West, wine in hand, watches on, seemingly approving looks. And he clearly approved as in other photos Fox, clad in her new look, straddles the rapper on the floor. The actress explained their chemistry with hopes for their future in the piece.

Kanye West previously said fashion was "a language of love" for himself and his estranged wife Kim Kardashian, who filed for divorce in Jan. 2020. The Donda artist dedicated his song Runaway to Kardashian, 41, last month at the Free Larry Hoover concert. However, Kardashian has been romantically linked to Pete Davidson since October. She and the Saturday Night Live star, 28, marked the start of 2022 with a romantic getaway to the Bahamas.

Kanye West married Kardashian in Florence, Italy in May 2014, and they share daughters North, 8, Chicago, 3, and sons Saint, 6, and 2-year-old Psalm.