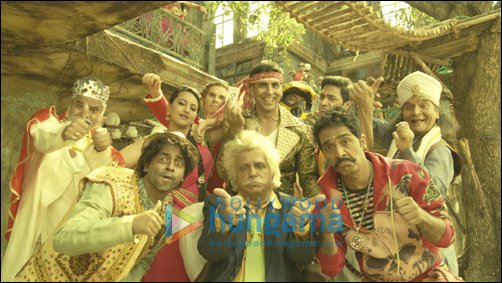 Shirish Kunder's film Joker seems to be one of the eagerly awaited films of this year. We bring you an exclusive image from the film where you see Akshay Kumar, Sonakshi Sinha, Pitobash, Shreyas Talpade, Sanjay Mishra and Asrani having a blast.

To find out more about the film, we spoke to Shirish, who said, "What I would want to clear is that contrary to what was being said earlier, Joker is not a superhero film. It has a sci-fi element yet is strong in emotions and humour, a bit like Satyajit Ray's short stories."

Further he adds, "ET was based on an alien but there was a lot of emotion and drama in the film which added to the soul, similarly Joker is also a fun film with loads of emotions and soulful drama and isn't just a sci-fi film."