Janhvi Kapoor and Khushi Kapoor recently went for a vacation in Dubai along with their friend Orhan Awatramani. From chilling in the city to going for a safari in the desert, it seems like the trio is having a fun time there. Janhvi on Wednesday took to her Instagram handle to share a few pictures from her ATV ride in Dubai. 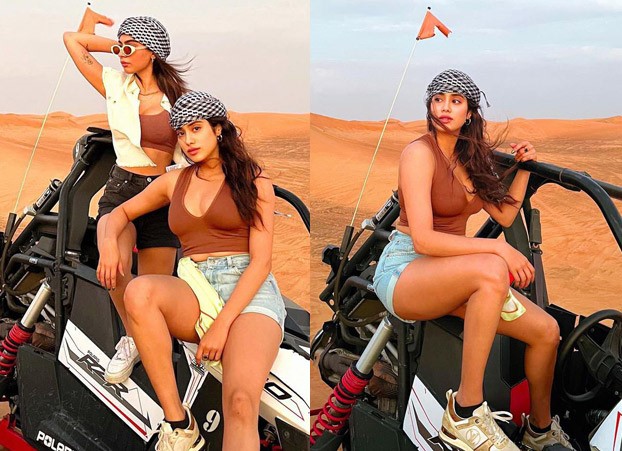 In the photos, Janhvi was seen sitting and posing on the ATV with her sister and friend. Janhvi wore a brown crop top and paired it with blue denim shorts. She accessorised her outfit with a black and white chequered headgear. Khushi, on the other hand twinned with her sister in brown top and headgear. She teamed her look with a pair of black shorts. Along with the pictures, Janhvi wrote, “dessert in the desert ”

As soon as Janhvi shared the pictures, her rumoured ex-boyfriend, Shikhar Pahariya, commented on the post, “Mashallah.”

Khushi also shared photos on her Instagram handle of them posing as well as a video of their ATV ride in the desert. “Vroom vroom,” she wrote in her caption. Her half-sister Anshula Kapoor dropped fire emojis while close friend Aaliyah Kashyap commented, “Dhoom Machale.” Her uncle Sanjay Kapoor left hands raised in celebration and heart emojis.

Meanwhile, on the work front, Janhvi, who was last seen on the big screen in Roohi, has a bunch of films in her kitty, including Good Luck Jerry, Dostana 2 and the remake of the Malayalam film Helen.