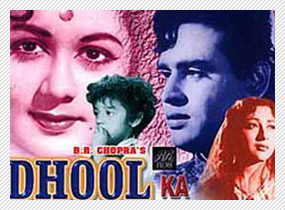 A career spanning over 50 years. Only 22 films made. And such respect gained that his name would be heard and spoken about by filmmakers all over

India, if not world-over, for next 200 years at least. That's Yash Chopra for you, the man who made only four films in last 20 years and still fetched the tag of a 'legend'.

of his film career, the one where Shah Rukh Khan held prominence. While Act III had a few insignificant films (and ironically a few classics) coming from the filmmaker, Act II

had Amitabh Bachchan holding centre-stage while Act I is what defined Yash Chopra, the filmmaker he turned out to be.

It was year 1959. A young man in his late 20s wanted to make a film of his own. Directed for his elder brother B.R. Chopra, the Rajendra Kumar-Meena Kumari starrer

Dhool Ka Phool may not be finding as much prominence today but back then it was a socially relevant film. His attachment to Hindu-Muslim tales continued with

Dharmputra but the biggest high came with Waqt, Bollywood's first ever multi starrer, which could well have given Manmohan Desai the formula of lost-and-found.

A massive success in the past as well as present, it was an arrival of a 'masala' filmmaker, if there was any such term back then.

loved till date. Set in one night at a single setting, the film is rightly hailed as a classic.

Ironically though, the film was released in Yash Chopra's tenth year as a filmmaker but there was no sign of a true blue romantic filmmaker yet. So much for the man who was

going to be hailed as the King of Romance decades later!

There was love though in Daag but it too was unconventional, what with the man trapped between two women in his life. A scandalous subject no less, it made way for Dev

By attempting various genres in his first innings as a filmmaker, it was time for Yash Chopra to up the ante. Stylised treatment was just finding its way in Bollywood and drama,

though available aplenty in films all around him, had to be extraordinary if at all it had to come with a Yash Chopra stamp.

Enter Amitabh Bachchan in Yash Chopra's life and it was time to experiment in a big way for the duo. The drama had to be an integral part though the storylines kept changing

and getting more and more ambitious. Deewar was a drama between two brothers with a revenge angle at the forefront. The 'maa' angle was born to be replicated for

decades to follow and the film was a huge success. Yash Chopra and Amitabh Bachchan didn't play safe by continuing in the same mode. They made a musical drama about love

found and lost and then found again in Kabhi Kabhie.

However, audience wanted some 'dhishoom dhishoom' as well and for that the script had to be all the more powerful. Trishul, a multistarrer, was a result of that and the

partnership of the duo resulted in Yash Chopra's second act turning out to be most lucrative commercially as well. With Kaala Patthar, the team became all the more

ambitious but surprisingly, the film didn't quite create a similar magic back then even though today it is a must in the library of those collecting films coming from the house of

these two legends. Ditto for Silsila, a poetic drama, which was a flop show back then but is hailed as a classic today.

This was also the time when video started making its presence felt and there was widespread confusion amongst filmmakers around what to make next. Yash Chopra, 25 years

after being in the business, wanted to go as per the market needs while also keeping his sensibilities intact. Sadly, this was also the phase when just about nothing was working for

the filmmaker. He made Mashaal, a well intentioned film with some spine chilling sequences but it just couldn't find an audience. Faasle, his least known film with

an even more unknown lead debutant in the form of Rohan Kapoor, flopped in a big way as well. He was back to a multi starrer set up with Vijay but despite some heavy drama in

the narrative, it was neither critically nor commercially accepted.

Thankfully, he went back to what he was best at, which is creating an all around romantic musical in the form of Chandni. The film, though being perceived to be 'thanda'

by cynics, went on to be a massive success, hence giving Yash Chopra a successful film 11 years after Trishul. His Lamhe, agreeably a film which was too ahead of

its times, flopped as well. Moreover, a certain Ajay Devgn was responsible for its downfall as well since his Phool Aur Kaante released on the same day. Today the film is

hailed as a classic but back then, it was a heartbreaking outing for all involved.

Final nail in the coffin was Parampara which, despite featuring Aamir Khan and Saif Ali Khan, was one of the least hyped films ever coming from the filmmaker. A failure,

it also brought to end Act III of the filmmaker's journey which was made of a few successes, a few forgettable affairs and some films which went on to be find their audience years

It was the last and final act of Yash Chopra's journey that turned out to be the most fruitful of them all, hence turning out to be a fitting finale. His production company started

spreading out in a big way, his son Aditya Chopra took charge and also gave a modern day classic in the form of Dilwale Dulhaniya Le Jayenge, while as a filmmaker who

had just turned 60 years old, it was time to go a little slow.

This was also the time when he met and nurtured Shah Rukh Khan. The film was Darr (1993) and it just changed the dynamics of the industry in general.

A massive success which started off as a Sunny Deol starrer with Shah Rukh as the antagonist, it ended up with tables being reversed as Shah Rukh hogged all the limelight as

well as screen time (and rightly so). Audience were surprised that in the times when so many filmmakers out there were struggling to tell a regular story in an entertaining

manner, how could Yash Chopra, the maker of Kabhi Kabhie and Silsila, get into the mind of a psychopath and still tell a violent love story so convincingly that you

the director for the first time. Shah Rukh Khan was understood to be a constant fixture by then and the association turned out to be even more successful. The trend continued

with Veer Zaara and the film also marked the re-entry of Amitabh Bachchan in a Yash Chopra film 23 years after Silsila. The film went on to break many records

and also marked a hat trick of super-successes that Yash Chopra and Shah Rukh Khan had given together.

While the gap between Dil To Pagal Hai and Veer Zara was seven years, Jab Tak Hai Jaan has now turned out to be one up with 8 years gone by since

Veer Zaara hit the screens. Needless to say it is coming with a huge hype for reasons that are multiple - Yash Chopra's last film as a director (something that he had

announced even before he left for the heavenly abode), Katrina Kaif turning out to be the woman-in-white for the filmmaker, a subject that is expected to be quite intriguing, a

title which seems more ironic today than it ever had before and a film which is touted to be the biggest of the year!

It is time for curtains to come down as Act IV of Yashji reaches its culmination. It's time that everyone is out there to cheer, applaud and say â€“ â€˜Jab Tak Hai Jaan. Jab Tak Hai