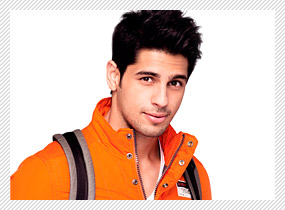 Sidharth Malhotra is not as shy as he is often reported to be. "I am quiet and like to observe people and situations," he tells Screen during a conversation which ranges from his stint as an Assistant Director to shooting his first as an actor, in a Karan Johar film


When I got the opportunity to work as an Assistant Director in My Name Is Khan, I think destiny had decided that I would eventually switch over to acting. Karan (Johar) saw Varun (Dhawan) and me, standing behind camera as stand-ins for Shah Rukh Khan and Kajol. He noticed that we looked okay under the camera lights and decided to cast us in this film. However, I had to audition before I finally got the role.


I used to model when I was in college in New Delhi. Then, I auditioned for a film and even came to Mumbai to work in that film, which never really took off. This was five years ago. I was in a dilemma about what to do. That's when a friend of mine suggested that I should try for an Assistant Director's job. I thought that it was a great thing, because I do not belong to a film family and I had no idea about film-making. Also my upbringing has taught me that in order to achieve something, you have to first study it. For example, if you want to join the financial services, you have to study MBA. Similarly, this was my way of learning the craft, which would eventually help me in becoming an actor or even a director. I sent my resume out. I also worked in some films as an Assistant Director, but the only film I devoted my entire time as an Assistant Director was in My Name Is Khan.

My first scene was a close-up. It was the song 'Radha' choreographed by Farah (Khan) ma'am. I was very nervous. In the shot, I had to hold Alia (Bhatt), but my hands were sweating profusely. I tried to rub my palms and muster enough courage. It was a huge set, with hundred dancers, superb clothes and there were Karan Johar and Farah Khan, and I was overwhelmed. But I realised that it is a big film and a huge opportunity, so I better not mess it up.


Firstly, coming from a non-film background, it took a while for me to understand film dancing and singing routines. I understood that is not about what you sing; it's actually how you sing it. Secondly, we did a triathlon, in which Varun and I are training for swimming, cycling and running. And we had trainers from America. We trained in Mumbai and in Bangkok, where the temperature was 42 degrees. We shot for 10 days, but when you see that on screen, it is just two minutes. It was a very hectic training schedule with hardly any breaks. We believed that since we were young and fit, we could do it, but it tested our fitness and was physically demanding.


I have learnt a lot from this film, but there's still a lot more to learn and understand, like, what looks good on screen, and what doesn't. I think, we'll only get better from here.


I am a big Shah Rukh Khan fan. I have seen K3G many times. And, of course, Hrithik Roshan. I like his personality and physique. I wish I could dance like him. Aamir Khan is a very intelligent man; I wish I could be as intelligent as he is. Even Ranbir Kapoor is cool; he is one of the youngsters who is very exciting to watch.