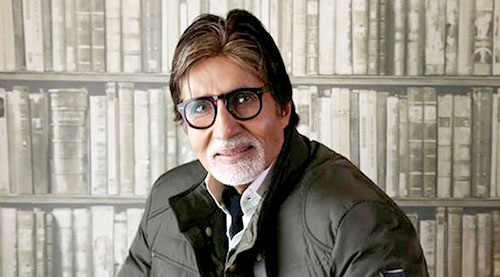 When Amitabh Bachchan gives you time, he does so with his complete attention. This is what I (further) realized during this interview where he went all out to make sure that every question gets its due, every word in his answers carries weight, not a single thought is out of place and humility, an expected factor from him (and a characteristic of his), is on display all over again. How does the man do it each time around, again and again, is beyond someone's imagination. However, the very fact that the 72 year old does so an untiring pace, is commendable by all means.

Was there ever a brainstorming between you, Shoojit and Juhi to give Piku an even happier ending by making you live on with one happy family around you? After all, that wouldn't have changed the core ethos of the film and perhaps also managed to allow audience step out of theaters on an even happier note?

No ..this aspect was never discussed or even thought of!!

As an audience, I could see a lot of happy faces in the theater though while the film played. However what caught my attention most was to evidence a horde of audience in their 50s, 60s and 70s stepping in. Now these are the people who have loved you as Vijay in several blockbusters. What is that you believe brought them out of their homes and catch on a different avtar of their favorite Angry Young Man in Piku?

These audiences, God bless them, did not come to see me. They came to see a good film a good story, a story which they identified with and one they could relate to. They happily got all of that. Limiting the audience to showing appreciation for just one genre of film and 'avatar' of an actor would be challenging the intelligence of the masses. Never EVER do that! Masses world over through years of existence have changed moral, social, historical and geographical boundaries. What's a film!!

Is it also the fact that the element of 'Look, he is Amitabh Bachchan and he is having the same day-to-day health issues as us, albeit as a character' which caught their attention?

No. Again, it's not Amitabh Bachchan... It's Bhaskor Bannerji they are witnessing - a normal aged individual. Personal traits do not apply to the characters we play. Or least I would imagine so!!

Meanwhile, what is also catching audience attention is the manner in which women actors in the Hindi film industry are balancing out the characters well. After all, a Deepika Padukone does a Happy New Year and follows it up with Piku, and audience grabs it with both hands. Isn't that a welcome trend when there are surprises always round the corner?

Yes .. of course ! And that speaks volumes for the ability of the artist involved. In this case Deepika !

However, in the process, the term 'women centric' is heating up in a big way too. As a veteran who knows more about the world of filmmaking than most out there, how do you see it when some term a film like Piku women centric, especially at its box office success, when the film has three key protagonists, including you and Irrfan?

What is wrong with a film being woman centric? And what is wrong if it cracks the box office successfully? Nothing. But remember this. For someone to be centric in a situation you would have to build a circumference around it. Remove that and we do not have a center.

Talking about the film's super success, Piku is now heading towards the Rs. 80 crore mark just in India while also doing wonderful in the overseas. As an actor, this is one of your highest grossers in the recent times. Is there a reason to believe that Mr. Bachchan could well be debuting as the mightiest entrant in the Rs. 100 crore Club with films to follow? Now that would be a spectacle, isn't it?

I am not in conversation with this delightful phrase called the '100 crore Club'. It has become a yardstick, much like the silver, golden and diamond Jubilee celebrations of older times. I am happy that this film decorates these landmarks. But whether the coming films will do so as well, just because the gates of 100 CC have opened wide for Piku, only time will tell. But I can tell you, it would be one helluva spectacle, because these moments have eluded me for long!

Part I of the interview