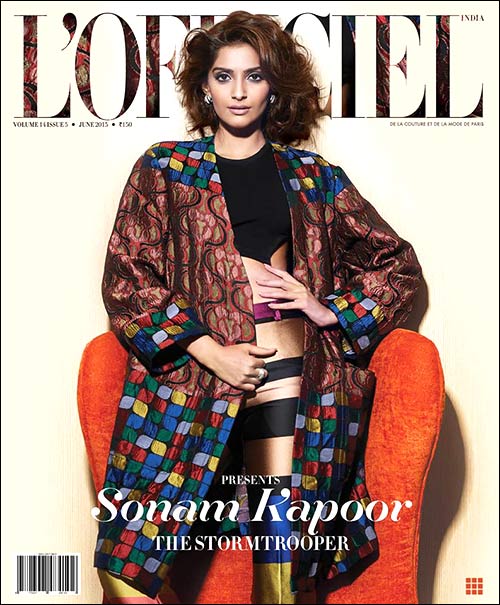 Sonam Kapoor, who will soon be seen playing a princess alongside Salman Khan in Prem Ratan Dhan Payo, never fails to impress us with her impeccable fashion sense. The actress experiments with fashion not only during public appearance but even for photo shoots. This time around, the actress sports yet another new look for the June edition of L'Officiel.


Presenting Sonam Kapoor as 'The Storm Trooper', the cover of the glossy has the actress donning wide striped pants and colourful jacket, both from the Dries Van Noten Ready To Wear Spring Collection 2015, pairing them up with a simple black crop from Dior along with the pretty studs from Manubhai Jewellers. Keeping up with the summer theme, the actress is also sporting a short messy hairdo and light make-up.


Sonam Kapoor, who has often played the girl next door, will now step into the shoes of a real life hero in her upcoming film. The actress will be seen playing the protagonist in Neerja, based on the life of Neerja Bhanot, PanAm Flight attendant who was the youngest recipient of the Ashok Chakra award as she sacrificed her life whilst saving the life of children during a hijack in 1986.