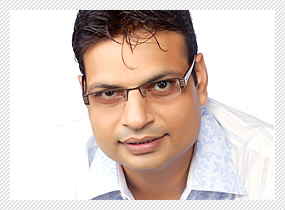 He's a visionary. Steeped in classicism with the right elements of contemporary

his work effortlessly gets. Add his scholarly and humble temperament and one feels that the

writer has been born after his time, for here was a man whose worth and verse would have been

Undoubtedly, the Numero Uno lyricist in the last few years, Irshad Kamil is no less when it

published in 2011, was a sharp analysis of trends in Hindi poetry and is itself rich in the

Hindi idiom as opposed to Irshad's greatest forte: Urdu. Clearly, like all the greats in Hindi

cinema, Irshad has a commendable mastery on both the languages that are - in the words of many

Irshad began his film career with Sudhir Mishra's Chameli, and 'Bhaage Re Mann'

mutually exclusive. The writer has completed a decade in the profession, a career of steady ups

(and negligible 'downs' for reasons not in his control) that include Socha Na Tha, Jab We

thundered into 2013 with Special 26, Aashiqui 2, Raanjhanaa and Phata Poster Nikhla

he wrote three songs) and the hit score of Yash Raj Films' Gunday.

Pandey's next with Akshay Kumar, Irshad has his bag full. And the prime catch is Sooraj

We meet up at Irshad's simple apartment for a Q-&-A with the forthright writer. Excerpts from

You have been raving about Sooraj Barjatya's new film with Himesh Reshammiya.
It is a lyricist's dream to work the way we are doing. We meet with the ideal of doing our best

for the story and the film, without thoughts about kya chal rahaa hai in the market!

There is no pressure that a song must be finalized at every sitting. It is an interactive

session between just three people - Sooraj-ji, Himesh-ji and I - where only our music is

discussed and ideas thrown up and worked upon without thinking of how much time has elapsed.

This is the way music would be created back in the golden ages of film music! There is no vision

other than doing the best for the film and ourselves!

Does not Salman Khan get involved?
Salman-sir trusts Sooraj-ji blindly. But he did tell Sooraj-ji that he has huge

expectations from Himesh and me as a combination! (Grins)

How does the majority work nowadays on the music?
By making us fit words at the eleventh hour to a tune that has a good potential of being a 'hit'

and to write words for a hook, which is not a substitute for a good song! (Smiles) There

are so many cases where I have quit a film midway, or after writing lyrics for just one song,

and I have not even taken credit for the track I wrote!

Having said that, I have been quite lucky to have got many other filmmakers who know the

importance of music and motivate and encourage the composer and me to do our best! Like Imtiaz

Ali, with whom I have worked from Socha Na Tha to Highway, or Subhash

(Ghai)-ji, who knew exactly what he wanted in Kaanchi. Working with Ali Abbas

Fazal in Mere Brother Ki Dulhan and Gunday, with the Tauranis and Rajkumar

enjoyable. There are other filmmakers too with whom I have great relations and who appreciate my

Among composers, I have worked most with Pritam, which is always a superb experience, but I have

a great equation with all composers, including the youngsters Sohail Sen, Sachin-Jigar and Amit

Trivedi. Among the seniors, M.M. Kreem is outstanding.

You also like to write a film solo.
Yes, that way I feel a sense of ownership and with that comes involvement in the story and

responsibility. This makes me explore the different ways a song situation can be approached

lyrics-wise. Farah-ji recently complimented my way of looking at a situation by speaking

highly about me to others. And this way, we can also see the variety of colours a writer can

offer, and his range.

from Gunday like 'Toone Maari Entriyaan' and 'Assalam-E-Ishqum', you have

shocked those who mentally restricted your talent to serious writing.
(Laughs) But I love naughty songs! And a lyricist must be able to write all kinds of

songs. I have just written a song called 'Kambal Ke Neeche' for Kaanchi, which is

- without double meanings and by keeping words within decent parameters.

I would rather quit a film - and have done so too! - Wherein I was asked to be blatant. It

disturbs me that filmmakers, composers and even stars like this kind of corruption in lyrics. I

do not do work that aims below the belt! We need to have restraint, a kind of self-check, and

some responsibility in those who choose the music and lyrics.

Majrooh Sultanpuri said that a lyricist's skill lay in saying everything

without saying anything.
Precisely, I agree completely.

But may we ask how Sufiana words have come into a Bengal-based film in Gunday? Isn't

that also pandering to trends?
No, there is a reason there: the heroes are fleeing from the law and take refuge in a Sufi

shrine. It is very important to give some thought to what kind of words and music fit a film.

Like in Highway, the film travels from Delhi to Rajasthan, Punjab, Himachal Pradesh and

Kashmir and the songs change accordingly.

You have reportedly written the song Rajnikanth is singing in Kochadaiyaan. How was

the experience of working with him and in your first dubbed film?
The song is not about makeshift lyrics to fit into the metre. We had the advantage that this

film is essentially animation, and those who watch it will realize that the lip-synch obtained

is perfect even for the Hindi version of this trilingual. That and good poetry were important,

so my songs do not have the same meaning or flow as that of the lyrics in Tamil and Telugu.

Rajni-sir's song is more of a recitation actually.

And working with him was an unforgettable experience. We interacted during the recording and he

asked me about the nuances. Rajni-sir is so humble and simple despite being what he is! He is a

What ails lyrics today? Or to put it another way, what should lyrics ideally be?
I think that a filmmaker should only give the canvas to a lyricist in terms of the story or

situation and should not employ him for executing his own thought in the lyricist's words!

Situation ko nibhana chahiye with good, big and new thoughts and an ascending and

progressive graph in the song's verses rather than taking the easy way out with hooks. Wherever

possible, some philosophy in simple words must come in, as well as new metaphors. At the same

time there must a bond between the director's take and writer's thoughts.

COLOUR OF THE WEEK - YELLOW: Priyanka…

EXCLUSIVE: “Nobody wanted to put that song…