The film Raksha Bandhan directed by Aanand L Rai had gone on floors a few weeks back in Mumbai. Starring Akshay Kumar and Bhumi Pednekar, the film had gone on floors in Mumbai last month and today the makers wrapped the first schedule. They had set up Delhi’s Chandni Chowk in Mumbai for the first schedule and as they wrap up the schedule, a sentimental Akshay Kumar took to social media to share happy pictures from the sets and also complimented the production designers on making the sets look real. 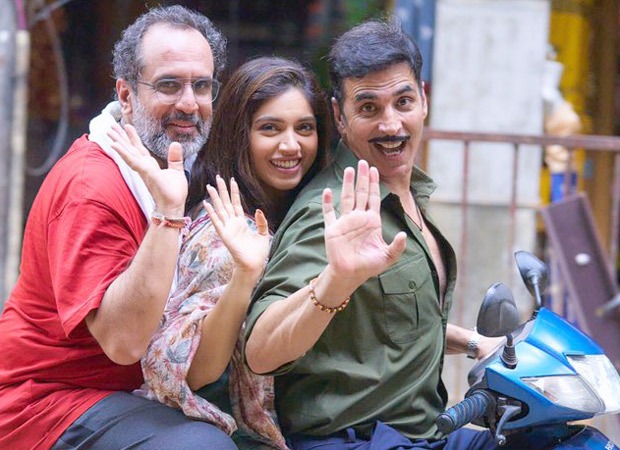 Akshay shared two pictures clicked on the sets. In the first picture, he can be seen sitting on a scooter along with Bhumi and Aanand L Rai. In another picture, she can be seen in discussion with Rai while walking on the sets. Sharing the pictures, Akshay wrote, "I’m already missing walking down these streets of Chandni Chowk. Even though it was a make-believe set…you made it look so real, take a bow @sumitbasu62. My wonderful co-star @bhumipednekar , thank you for providing the right balance with your splendid talent. And @aanandlrai sir…what can I say about you, besides that you’re a wizard and today as we wrap up the Mumbai schedule of #RakshaBandhan, I know I’m leaving the set a better actor".

The film directed by Aanand L Rai also stars Sahejmeen Kaur, Deepika Khanna, Sadia Khateeb, Smrithi Srikanth who will be seen playing Akshay Kumar's sisters in the film. Announced last year on the occasion of the Raksha Bandhan festival, the movie revolves around the brother-sister bond. Akshay Kumar had said, "Raksha Bandhan is a special film for all of us, rarely are such pure and simple films made. Can’t wait to begin filming for this one!" The makers were aiming for a November 2021 release. However, owing to the pandemic, the film got delayed.