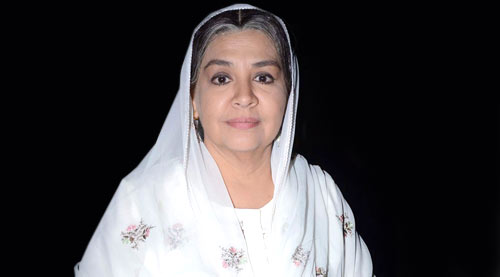 Farida Jalal, undoubtedly one of the most talented actresses of contemporary cinema, is back after a longish hiatus, this time on television. She reminisces with Subhash K. Jha on her remarkably rich though incomplete career.


Such a long and fruitful journey?

I'd like to think so. I started my acting career when I was just out of my school St Joseph's Convent in Panchgani, in a film called Taqdeer. I took part in a talent contest and even won. Kaka (Rajesh Khanna) and I were the finalists. How was I to know that I'd soon be doing a film Aradhana with him? 45 years later I am here doing a serial.

I virtually grew up and grew old in this fraternity. It's a lovely place to be in. I want to spend all my life in the Indian entertainment industry.

Why do we see so little of you on screen?

I've done it all. I've been acting since I was out of school. I've received plenty of recognition. By God's grace I've won awards. I've a reached a stage in my life where I need to be more choosy. I can't go around doing everything that's offered to me. I'd love to do challenging roles. But who will give them to me? The parents' roles in today's films have been marginalized to the point of becoming non-existent. Not that I am keen playing the typical mother...

Do you feel the senior male actors get a better deal?

Yes. I've been jealous of my male colleagues like Amrish Puri and Anupam Kher. How lucky are these guys. Even if they played a father they had so much to do. I just had to wear a plain saree with a border, and look after my son. In how many ways could I go 'Beta beta.'

You always managed to make every mother look different?

I tried my best in whatever limited space I was given. The last big-screen role I did was in Karan Johar's Student Of The Year where I played Sidharth Malhotra's Daadi. I had a very nice scene with Sidharth which they did not keep in the film. I ended up with just a few scenes. But it was a fun experience.

I think in a career of over 40 years I've created a few memorable characters. For me that is enough. My first film Taqdeer was a milestone in my career. So was Aradhana-I am still remembered by that film and the song 'Baaghon Mein Bahaar Hai'.

After playing Rajesh Khanna's heroine in Aradhana why did you get typecast in sisters' roles?

It all started with Gopi where I was offered the greatest Mr Dilip Kumar's sister's role. Forget about refusing, I jumped at the offer. Even if I had the chance to just go and observe him on the set I'd have done it. I love the man. I remember during those days each and every actor was copying Dilip Saab whether it was Dharmendra, Jeetendra or Manoj Kumar. I was much in-demand as Dilip Saab's sister. Every hero wanted the same. Every actor wanted me to play his sister.

Didn't it get monotonous?

I enjoyed playing every role. Sometimes the sister was the film's heroine. The official heroine would just sing her songs whereas I had all the dramatic scenes. I got my recognition and the awards. In a film called Paras I was Sanjeev Kumar's sister. But I had a lot more to do than Raakhee-di who played the heroine. I got my first award for it. Then I got my second award for Majboor, a film written by Salimbhai and Javedbhai where Bachchan Saab played my brother. It was so heartening. Why would I want to be heroine when I was getting the stronger parts as the sister?


But a heroine is a heroine, right?

Haan, woh bahot log kehte hain. Aap heroine nahin bani... But I didn't mind at all. I don't think there has been another significant actress after me for sisters' roles

How would describe the vibes that you get from the film industry these days?

I wouldn't say I'm completely happy. Because I am so senior I get a lot of respect and love. It's in their eyes. Anyone who meets me does so with genuine affection. But if we're talking about the quality of films being made then I've to admit there isn't much to be happy about. All the filmmakers we looked up to have gone away. We need a Bimal Roy, B R Chopra and a Yash Chopra. As for the music, it's a big deal if after hearing today's songs once you hear it again.

Tell me about your role in the new serial Satrangi Sasural?

I am returning to television because I've known the writer for many years. I play the matriarch. I know the hours that I've to put in and I am prepared for it.

Tell me a bit about your family?

I've a son Yaseen. He is not interested in acting but direction. He's putting together a project that should be ready next year. I hope audiences give him the same love that they've given me.

We'd like to see more of you on screen?

What to do? I can't write roles for myself, can I?