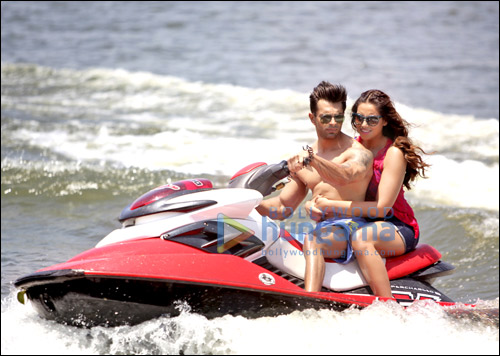 After films like Raaz, Raaz 3D, Aatma and the recent Creature 3D, Bipasha Basu is all set to add yet another horror on the list. Directed by Bhushan Patel, the actress will be seen in the upcoming horror love story titled Alone.

Bipasha Basu is busy shooting for the same in Kerala with Karan Singh Grover, a popular TV actor who is all set to make his Bollywood debut with this film. In fact, the two of them were spotted enjoying a beautiful jet-ski ride on the famous backwaters for a scene in the film. However, we hear that the actress witnessed a near-death experience while shooting this sequence. Apparently, the speeding jet-ski that the duo was riding overturned and began to sink. Moreover, Bipasha fell off and since the crew was quite far from where the duo was, they could not help the actress. But her co-star Karan came to her rescue and jumped into the water and saved her just in time.

A shocked Bipasha Basu was taken onto another boat and it took her a few hours to get back to normal. She resumed shooting again and eventually completed her scenes for the day, confirms a source close to the production team

Produced by Kumar Mangat Pathak, Abhishek Pathak, Pradeep Agarwal, Prashant Sharma, Alone is a story of conjoined twins played by Bipasha Basu and it is slated to release on January 16.