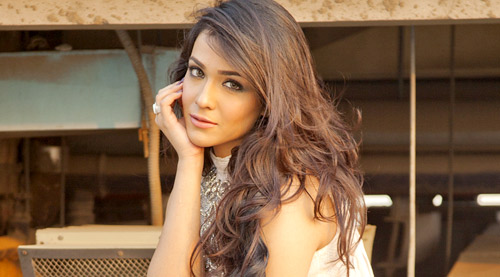 Three years after a terrific performance in Bol (2011), Humaima Malick would be seen on the big screen with Raja Natwarlal. The films are as different as they get, right from stage, setting, presentation and narrative. From an award winning set up in the Pakistani affair, she is taking an out and out commercial route with the Emraan Hashmi starrer.

We catch up with the gorgeous girl.

After Bol, there must have been a lot of offers from India as well as Pakistan. What made you choose Raja Natwarlal?

I believe that I have proven myself as an actress with Bol. There were international awards and the film introduced my country to so many other countries. Now I wanted to do something different because as a person as well as an actor I like challenges. I wanted to experiment with different stuff. Now after Bol, if I had done another Bol, then it won't have got your attention, right (smiles)? Today, everybody is trying to do something different, so why not me?

Did you have anything specific in your mind even if the idea was to do something different than Bol?

To be honest, Bol jaise script aapko dus saal mein ek baar milte hain. Maybe I won't be able to do a film like that again. So the idea was to do an out and out entertainer next; the genre didn't matter.

Well, you got one with Raja Natwarlal.

After the film, audiences will remember the intense lover that I am playing on screen. You need audience to connect with the character and for that as an actor you need to have your self confidence in place to make sure that it happens. Whatever space I have got in the film to perform, I guess I have done well as an actor. There was certain leverage available to me and I have used that to the fullest. I like Kunal as a director; even today his Jannat is one of my favorite films. I hadn't seen too many Emraan films though since the kind of space that the two of us have been as actors is different (laughs).

Were you surprised though when given an offer to be paired opposite him?

When I got to know that Emraan Hashmi was the hero of the film, I asked Kunal why he still wanted me to do the film (smiles). I have done the kind of cinema in which I am fully covered with 'dupatta' and all; I have been discussing issues on screen. And here I was being offered a full-on glamorous part. So when the film came my way, I had a shocking reaction.

Well, you now have some good songs and dances to your name.

I love 'Tere Hoke Rahenge' for which I have shot the female version. Then there is 'Namak Paare' which is an out and out dance number. 'Ruhaani' is very soulful and is one of my best songs as you can literally feel the love. A song like 'Flip Your Collar' requires me to turn hot.

That's a core requirement of an Emraan Hashmi girl, isn't it?

You know, the first time that I met him, it was at his house. Kunal (Deshmukh) took me there for a script reading session. I used to think that Emraan puraani filmon ke villain ki tarah hoga but he turned out to be a nice boy (laughs). Yes, I was a little shy to begin with during the shoot. It wasn't as if he was intimidating but then shuru mein thodi jhijhak toh hoti hai. I remember that the first time we shot together, it was during a night shift. It was for an intense scene. I realized that he is a very fun loving and chilled out person. He even started teasing me and pulling my leg. I liked him being around when I was on the sets.

How is the buzz about your pairing in Pakistan?

I am told that it is quite good. I am keeping my fingers crossed to check out the response for us and the film as a whole there. I want to give them a good commercial entertainer now after a sensitive Bol.