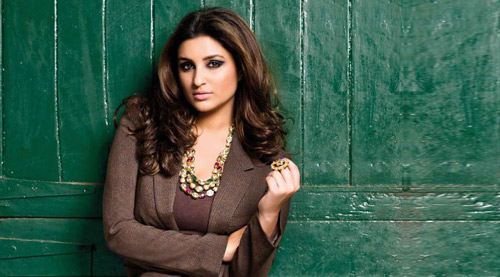 Parineeti Chopra, whose last release was the ill-fated Kill Dill 15 months ago, took a voluntary sabbatical to work on her health and physique. She is now back, finally,

with a new project that she announced in style, through a video recording on Tuesday. Parineeti's comeback film is the sweet-sounding Meri Pyaari Bindu. And yes Parineeti plays Bindu.

Nothing vampish about that! The actress in conversation with Subhash K Jha

So welcome back, Parineeti?

Thanks. But where had I gone? I was right here. Busy with so many things. Going by the number of people who have been calling and messaging it feels like the film has already been released, ha ha.

Seriously, it feels really great. The video has worked. We wanted to announce my film in a new way. Also, it shows everyone how I am looking these days, etc.

In the video announcing your new film Meri Pyaari Bindu, you reveal a sensational singing voice in the song.

It's an amazing track composed by Sachin-Jigar. I am big fan of Sachin-Jigar. I loved recording the song with them. It was a great experience. Actually, I have been singing from childhood.

Thankfully I've inherited the singing genes from my father. My father put me on to a music guru from childhood. I am trained Hindustani-classical singer. I play an aspiring singer in Meri Pyaari

You are a graduate in Hindustani classical music?!

Yes!! All my family and friends know I can sing. I am constantly humming around them. Music directors did suggest in the past that I should sing for myself. But it never happened. I am glad Maneesh

Sharma (who is a producer on this project), Aditya Chopra and my director Akshay Roy convinced me to sing in Meri Pyaari Bindu.

Coincidentally Ayushmann Khurrana, your co-star in Meri Pyaari Bindu is also a singer?

What took you so long to accept a new acting project?

Well, the script had to work for me. When I read the script of Meri Pyaari Bindu it connected immediately with me. It felt like such a feel good script. I think Akshay Roy will make a good

film. That I get to sing is a bonus. Adi (Chopra) is the producer. So it's like coming home.

Of course! Meri Pyaari Bindu is the first film I announced. There are others coming up. I am going to do everything this year that I wanted to do. You will hear many more announcements from

me. Now I am back into action.

In April. We finish in June. Then I go on to my next.