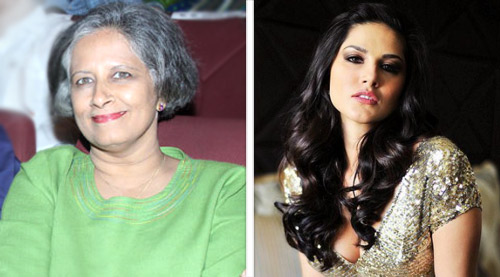 We all know about the (infamous) interview of Sunny Leone with the renowned journalist and how tactfully she had handled the interview. Immediately after this, almost the whole

has now written an open letter to Sunny Leone, in which, she has praised Sunny Leone for diligently handling the interview even when she was posed with uncomfortable questions.


The letter is as follows:


I felt compelled to write to you to applaud your dignified composure throughout the attempted public lynching by an immature, crass interviewer on national television. He tried to abnegate your

present; his was a blatant misogyny. His look was torn between personal lust and cultural impairment.

In the very first question about "any regrets about your past life", his implicit agenda became evident - to get a confession of "immoral conduct" from someone who is slotted as the best-selling

yet stigmatized sex object! His ulterior motive was indeed to grab the highest TRP (which otherwise would have remained at the rock bottom). He was itching to expose your vulnerabilityâ€¦ probably to

patronize you with his condescending overtures. We all saw how complicit he was in the dissection of your past which he was pruriently condemning.

His implication was that while making a "wrong & morally corrupt" career choice, you had walked on a slippery slope. You were gracious enough not to point out to him that he represented all those

who accompanied you all through your walkâ€¦ albeit cowardly and secretly hiding to slacken their orgasmic pleasures. You could've asked "Where are your internalized moral prohibitions when you are

with me?? You could've sermonized him on the didactic quality of your work, asking him, "Isn't the pedagogy of sex an all-time need? ? I'm happy that you didn't take this path as he would've

remained sanctimonious, no matter the amount of enlightenment gets poured in his lapâ€¦ after all as the Arabic adage goes, "It is a goat, even if it flies!? Having said this, one thing you ought to

have asked him, "Have you not consumed me? If no, then ask me any question and let's have a cathartic session. If yes, then let's talk about how and why your channel was mutilated as a result of

which you were brought in." His smug face would've been downsized hopefully!

Then, maybe you could've gently explored whether his ambit of vulgarity/obscenity includes, among others, pimps in the free market, cricket, page 3 trivia, and of course the boot licking

proud that I didn't have to use anyone else's body to hike the TRP or to hit the box office." I wonder how the next 18 minutes of the air time would've been covered!

Sunny, I was not at all surprised by his "around the bush? approach. I would've admired him had he interrogated you straight by giving the anti-porn feminist rap about "commoditization or

objectification of female body; how it's a systemized degradation, and how it leads to proliferation of sexual violence etc.? Since he isn't smart enough to drop names beyond Aamir Khan, you

could've quoted scholars like Andrea Dworkin, Catherine McKinnon whose crusade has been to regulate if not eradicate pornography. There upon throwing Wendy McElroy's name who asserts that

pornography benefits women both personally and politically, you could've asked, "If we as feminists believe in "my body, my choice?, why cannot pornography within the regulatory limits be my

Sunny, this is a classic duel between individual freedom and social control. The present day hash-tags about intolerance erupt from this very conflict. Where do you draw the line between "allowed?

and "offensive?? Who draws that line? Who gives them that right to override your personal liberty? But moral censorship is our forte! In 1950, charges of obscenity were filed against Akbar

Padmsee's painting of a naked couple. Public exhibition of nudity is considered a crime of an "obscene act in a public place?. The Judge ruled that since the work was within the premises of an art

gallery, it could not be deemed obscene. My point is that your craft has a context and it got to be seen in that context. Besides, pornography is not criminalized in India.

Your situation is actually very unique Sunny. Typically, a chosen few hoist the moral flag after which the mob takes over and the majority remain bystanders. All these 3 categories are your fans

and not just viewers! How much they love you and your art got substantiated by the statistics cited by the interviewer. If their joint sessions with you were not enriching and libratory, why would

they have visited you time and again?

So you can say "Let him who is without sin cast the first stone." Actually, they did not cast any stone at you, and in fact expressed their gratitude towards you when they unequivocally lifted the

ban on the triple-X internet sites. It is ironical that while lingam and yoni had occupied a respected space in our traditional epics and art, porno-phobia has fractured our

The only concern you will be sharing with them is when the participation in such activities is coerced and non-consensual. When participants are under duress or are incapable of giving their

consent (as in case of mentally or physically challenged or intoxicated persons), forcing them is wrong in every sense. Our dispute arises against their omnipotent audacity to claim that the

consenting women are so damaged and exploited by the patriarchy that their consent is neither voluntary nor free. If my consent for my adult acts is alleged to be notional, why won't you call a

wife's freedom offered by the institution of marriage an illusion? Is a married woman devoid of the patriarchal cultural dictate? Isn't she expected to present her sexy avatar to her divine

husband and to surrender? Is it not objectification? When you are reacting to my actions on the screen, don't you think that I AM the owner of my own body? Can you think so about your wife when you

are imposing yourself on her? Irony is that a wife's conduct has to conform to the approved text of patriarchy. Sunny, you are free of all this hypocrisy. Don't believe in the accusation of married

By now, Sunny you might have understood my intention behind not naming the interviewer as he shall remain a variable representing the misogynist jerks of the world (pun unintended)! Journos will

also shy away from publishing this letter claiming "it's outdated". Are the issues raised here outdated??? Moreover, will 'Sunny' the metaphor ever be outdated?