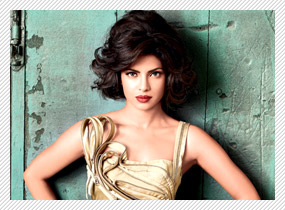 In between my interview, I ask Priyanka Chopra, "So, who am I talking to? - an actor turned singer or a singer who can act? The actress replies, "An actor and a recording artist". There you go, a new word to learn each day. 'Recording Artist'. That's the word Hollywood uses and billions of music fans do. She pauses for a second and continues, "I like the word. That's how you use it". I love PC. I like her uber confidence and her no-nonsense approach to things and the fact that she wants everything to be precise. There is an air of surrealism whenever I talk to PC and thank God, into this happy atmosphere there was no publicist, manager, blah blah blah. Just me and PC and the phone line that went a bit berserk. With fifteen minutes of my allotted time with the actress, I had about ten questions for her and I was super confident of extracting no cliches in the duration allowed. But the question is a pretty simple one: Is there any way to avoid the phenomenon, powerhouse, one-woman wrecking crew that is the pop-culture tsunami of entertainment and full throttle business success called Priyanka Chopra aka PC aka 'my' Meryl? No arguments please!

I just tweeted before I called you - "Talking to PC on all that it takes to shake those biscuits". So really, what does it take?
(Laughs) That was funny, honest. Well, I just wanted to make sure that 'In My City' being an international album and video and it is for the globe trotting audience and I wanted the world to get a taste of our film industry. This is my ode to Bollywood. And trust me, a lot went into shaking those biscuits (laughs).

Are you looking at Indianizing a few more videos in the album?
It's going to be organic and depends on what kind of a song it is. I do want to cut my own identity. I have cultural roots and I want that to be a part of music.

I guess everyone's got their niche, be it Eminem who's a rapper, Timberlake's doing his own mad stuff. What's your niche?
Well, my niche is singing as of now (laughs). But I do want to bring in my own uniqueness to the album. I am from India and an actor from the Hindi Film Industry to cross over like this into music. So it is a first of its kind. We have a billion people growing on Hindi movies and I want the world to understand and accept the Indian pop culture a lot more. The way the youth is today, is what I want my music to be representative of.

I've been interviewing you since 2004 and never ever have I seen any signs or roots of you going to be an International Sensation in Music.

That's because I do things softly, quietly and it isn't really the best kept bathroom secret (laughs). I'd rather do things and then talk. This is just the beginning and I hope I achieve a lot more in this sphere than I expect because I love movies and music.

But now-a-days singing isn't about melody. It's more to do with a voice filled with attitude. You have it in you!
Well, thank you. But again it depends on what kind of genre. You cannot generalize. Pop culture is all about entertainment. 'In My City' is pure entertainment. That's what this album is going to be out. It has to do with the attitude and the vibe you want to portray with the song.

You must've met so many International Artists from the Music Industry down West. What's the special trait about them? Some of them are big movie stars. J-Lo, Timberlake, etc.

They are all public people. I guess the only difference is their culture. They are not any different from us nor are we any different from them. They cater to the worldwide audience and we cater to an audience that loves Hindi cinema. Out there, once the song is composed, the producer and the label sit together and talk about whether we need any collaboration for any featured artists. In this case it was Will.I.Am. But there are other featured artists too. My dream has come true with 'In My City' and I couldn't have asked for more.

You are the Best. I mean, you get the best role of your career in Saat Khoon Maaf, you get to work with the best, Ranbir Kapoor in Barfi, and you get the best film Barfi too. You love being the best, don't you?
(Laughs) You're right! I cannot settle for anything less than best. I am right now concentrating on both - movies and music. I have four big movies releasing in 2013. I have my other singles releasing with the music videos. CAA is handling me. But I don't look out for roles down Hollywood. If something interesting comes my way from Hollywood, I shall do it.