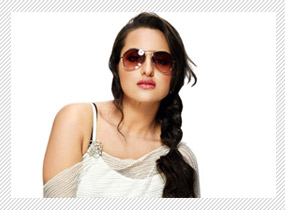 Sonakshi Sinha is on a roll. With two 100 crore films to her name and at least two more expected to be added before the end of year, the voluptuous girl is pretty much in charge of her Bollywood journey so far. Though she could well be the first to admit that she hasn't been pushed to the hilt as an actress in films like Dabangg and Rowdy Rathore, Sonakshi also knows that there is good time for performance based roles to come her way as well in future.

"I am enjoying every bit of the work that I have done so far", says Sonakshi, "All said and done, I am getting to play a variety of characters. To think of it, who gets to play someone from different parts of the country in her first few films itself? You see girls out there who are forever playing Western stereotypes. I have been fortunate though to have played a U.P. girl in Dabangg, a Bihari in Rowdy Rahore and now an NRI in Joker. Moreover in OMG Oh My God I also have a song like 'Govinda' which is set in Maharashtra. Then in Lootera I am playing a Bengali."

Perhaps the next logical step for her could be playing a South Indian but since Deepika Padukone and Asin are some authentic competition for such outings, Sonakshi may go a little slow in that endeavour.

Closer home though she has Joker lined up for release. All eyes are on this film because if this Shirish Kunder directed film crosses 100 crores at the box office, she would be the only actress to have a hat trick of centuries to her name in her first three films itself.

She smiles, "When that happens, we will see. Abhi se soch ke why get harrowed unnecessarily. Shirish has given me a film which is an altogether different experience. For audience it is going to be an entirely different visual narrative."