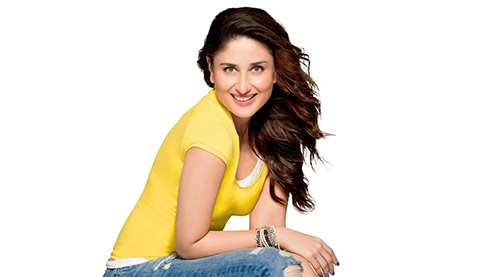 Punjab and R. Balki's Ki And are a part of her plan to go beyond mass-oriented cinema. She tells Subhash K Jha about her plans.


How are you spending your birthday?
Celebrating with Saif and family at the Pataudi

palace. That's where I belong.


How happy are you with your journey so far?
I don't look back. And I never analyze.

I do what comes to my heart at any given time. It is been an exhilarating 15-years journey so far. I've had great films, not so great films and bad films. And, I am possessive about even my

unsuccessful films like Dev. Chameli was not a blockbuster. But it's a milestone in my career. However, destiny has written several blockbusters in my journey. And I am grateful for that.

for a different kind of experience in my career. Of course, I love Salman's kind of cinema. But it's time for me to digress for some time. I'll be doing two offbeat roles now. Abhishek Choubey and

R. Balki will take me to a totally different zone.


Shouldn't you have taken the decision to do unorthodox films long back?
I went through a lot of changes in my life after I

got married in October 2012. My priorities changed. I began looking at life a lot differently. The best advice I got from my entire family-my parents, sister and husband-was to do whatever I wanted


You didn't mind losing something like Sanjay Bhansali's Ram Leela?
I was under no pressure. At that point of time

I wanted to do mainstream films which didn't require too much of time so I could concentrate on my marriage and on building our new home. That's why I did Bajrangi Bhaijaan, which didn't

require that much of my time.

Do you consult Saif in career decisions?
Yes. Saif said I must do Bajrangi Bhaijaan. And I


After Chameli, Sudhir Mishra was very keen to do another film with you?

Yeah. But, at that point of time, I was happy just doing one offbeat Chameli and then going back to my commercial films. Now, I am ready to give more time to exploring the actor in myself.

I've nothing to prove anymore.


Why do you do so many item songs for friends?
Why not? Mera dil bahot bada hai. And I

love my item songs. And I love to dance. And these item songs make me look good.


You don't have to do item songs to look good. You are beautiful even without them?


Aren't you bored of being branded beautiful?
No woman ever gets tired of being

called beautiful. But, I know there's a lot more to me than being beautiful.


So at this point of time, do you see yourself as an actress or a wife?
I am a happy home-maker and a star-


What is the role you can't see yourself in?

somersaulting mere se nahin hota. I don't like doing action roles. Not that I can't do it. But I am happier being known for Jab We Met.