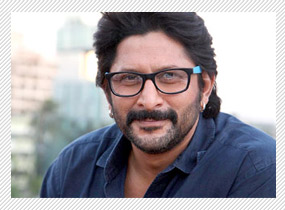 January is pretty much Arshad Warsi's month. He already had one release (Mr. Joe B. Carvalho) and is now all set to bring Dedh Ishqiya. Meanwhile he has also started shooting for The Legend of Michael Mishra. Hours before the arrival of sequel to his critically acclaimed and commercially successful Ishqiya, Arshad gets talking about it.

Dedh Ishqiya is one film which is arriving with huge expectations.

Yes, but more than me or any other actor in the film, I think the pressure is more on Abhishek (Chaubey). As a director, he has to take the franchise a notch higher. While I and Naseer were acting as Babban and Khauljaan, he had to tell a new story while keeping the essence of Ishqiya intact.

Yes, Ishqiya had a lot to do with the chemistry between Babban and Khalujaan. Do we see a repeat of that here?

What is happening here is that yes, the two are there and the film has a lot to talk about a part of their life. However in this particular episode, Madhuri and Huma enter their life as well. So yes, Babban and Khalujaan are taking the story forward but you can't ignore the women out there. You would also see a lot of Naseer and Madhuri together.

How about you and Huma Qureshi?

Huma is someone I noticed during the days of Gangs of Wasseypur itself. I instantly realized that here was this girl who knew how to act. She didn't come with any hang ups during the making of Dedh Ishqiya either. In an extremely realistic yet commercial film like Dedh Ishqiya, it was pretty much required that we have a good actor who also has that mass appeal about her. In that context she fits in well into the film as she fulfils that criteria very well. She is extremely good and easy to work with. There is this lovely realistic and natural thing about her.

You must have missed Vidya Balan though.

Of course, as a matter of fact I do wish that Vidya was there as well in Dedh Ishqiya. Mazaa aata hai uske saath kaam karne mein. Anyways, one does move on as per the film. Earlier Vidya and I were bringing on all this madness in the film; this time around it is the turn of Huma and I. It is a different kind of chemistry. In Dedh Ishqiya, Huma's character is much more sexually aggressive than the one played by me.

On the other hand Madhuri brings in a different kind of 'ada', right?

There is a whole story in there. There is an altogether different world where Madhuri lives. It is all very interesting as there is a lot of undercurrent truth being said between the lines. Some people may get it, some may.

Apparently Abhishek has adopted an unconventional narrative this time around too, just like was the case in Ishqiya. However, was Vishal Bhardwaj involved in the creative capacity as well?

My judgment and knowledge about Abhishek is that he is not the kind of person who would be swayed by another person's idea unless he is 200% convinced about it. I am sure he must have seen several suggestions coming his way from all quarters, including Vishal. However, ultimately it is Abhishek's film all the way.

Looks like he has brought in some good dramatic and even thrill elements in the film.

Yes, there is a strong dramatic element in there. Also, there is this strong 'Muslim' culture that you get to see, courtesy the film's Lucknow setting. The intensity of love, betrayal, heartbreaks, two timing and everything else comes together in this story. Abhishek has got a good mix in place here.

Last week, debutant director Samir Tewari tried something on the same lines from comedy perspective with Mr. Joe B. Carvalho.

See, every director's movie has a bit of his own personality in it. If he is volatile, it would show; if he is 'shareef' then that would show too. Samir is something like that. He is a very clean man and not really over the top. He is not loud or in your face. He wanted to make sure that the film didn't have an ounce of vulgarity to it.

Many termed the humour in the film to be way too subtle though.

That was intentional as Samir comes with his own brand of humour. Level of that had to be controlled. We wanted it all to be a lot relaxed and enjoyable. There was always a fear though that whether people would like a film like this since the humour was way too subtle and clean.