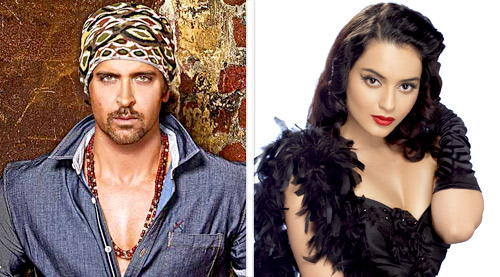 The post-breakup sordidness that has skeptically seeped into Hrithik Roshan's and Kangna Ranaut's mutual allegations, preponderates one question: what were they thinking when they decided to indulge in this very public mudslinging that shows both of them in a very poor light?


It's one thing for stars to have flings and affairs. They are good-looking and their libidos are constantly ignited by success, fame, fortune and power. To fling the affair in each other faces after it's over is a sign of the lowering moral temperature among the idols and the icons of Hindustan.


Everyone knows married stars have their trysts on the sly and wives simply ignore them as a professional hazard. So why did the sh*t hit the ceiling this time? Who pulled the plug on this private liaison? What made Roshan and Ranaut behave like two hellishly furious wildcats meowing and scratching one another masked faces while the world watched in glee?


Sadly, whatever their provocation they have in one swift stroke of self-damnation proved how unworthy today's stars are of being emulated, let alone idolized. Both Ranaut and Roshan have constantly projected themselves as youth icons. And to be fair, they had a lot going for themselves. Both have overcome seemingly insurmountable obstacles to acquire a heroic stature. Kangna is the archetypal small town girlâ€¦.from Himachal Pradesh who arrived in wonderland with no filmy background, no connections in Bollywood, no grooming.


Kangna landed in Mumbai with just a dream in her eyes and a recommendation in her bag into the home of "family friend" Aditya Pancholi. Soon Kangna was in a violent relationship with Pancholi. She repudiated the brutal bottleneck in her life, got herself Anurag Basu's Gangster, metamorphosed into a fashionista (paralleled in sartorial chic only by Sonam Kapoor) and is today acknowledged as one of most feisty female heroes of Bollywood.


Though belonging to an illustrious film family Hrithik Roshan's life has not exactly been a bed of roses. As a child he had an awful stammer that made him the brunt of illimitable bullying. Hrithik has spoken forthrightly about his speech impediment and how he overcame it to become one of the biggest stars of Indian cinema.


Both Kangna and Hrithik display the upside of aspirational self-improvement. Perfection is what they seemed to aim at in their careerâ€¦Until this embarrassing stumbling block that has reduced their entire image of can-do heroism to one swift self-destructive scoop of scandal.


Honestly, what were the two thinking when their decided to go public with their post-coital rage?


Hell, they say, has no fury like a woman scorned. But hell, Hrithik isn't even a woman. Why is he feeling so scorned? Next time, don't ask where all the heroes have gone. Just look at the way these two have conducted themselves. One called the other a 'silly ex'. The other insinuated he would rather have sex with the Pope than with the lady in question.


Where does this exchange of bitter bickering leave the fans of the two actors who saw Kangna as the Queen from Chandni Chowk who took off on her honeymoon all on her own when her husband-to-be ditched at the mandap? And Hrithikâ€¦tch tch. That mask of the super hero has been peeled off to reveal the ugly truth behind the beautiful faces of showbiz icons.


In Krrish 3, Kangna had played a mutant who falls in love with the super-hero Hrithik. Little did we know that the definition 'character assumes different shapes' would turn out to be so ominously non-virtual.