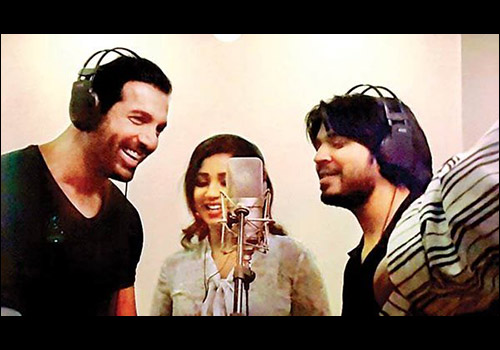 Whilst several actors are fulfilling their wish of turning a playback singer, here's yet another actor who has decided to sing the unplugged version of one of the songs from his upcoming action thriller Rocky Handsome. John Abraham will be lending his voice for 'Alfazon Ki Tarah' unplugged.


In fact, we hear that the said decision was impromptu. A picture of John Abraham recording the song along with singers Ankit Tiwari and Shreya Ghoshal at a Mumbai studio has been doing the rounds on the web. It is being said that the makers decided to add this track after the entire album for Rocky Handsome was finalized. Prior to this, John has only sung a rap song in Welcome Back and this time around he will be lending his voice for this number along with Shreya.


Directed by Nishikant Kamat, Rocky Handsome that stars Shruti Haasan and Baby Diya Chalwad is slated to release on March 25.