Pooja Hegde is better known for her debut Mohenjo Daro with Hrithik Roshan. The movie did not fare well at the box office but Pooja was noticed for her poise and screen presence. The talented actress and model has turned cover girl for lifestyle magazine, Femina, and looks resplendent in a lime yellow swimsuit! Throughout, she struts around in many swimsuits, killing it with every look. While she does look mercurial hot, she calms you down with her cool attitude. 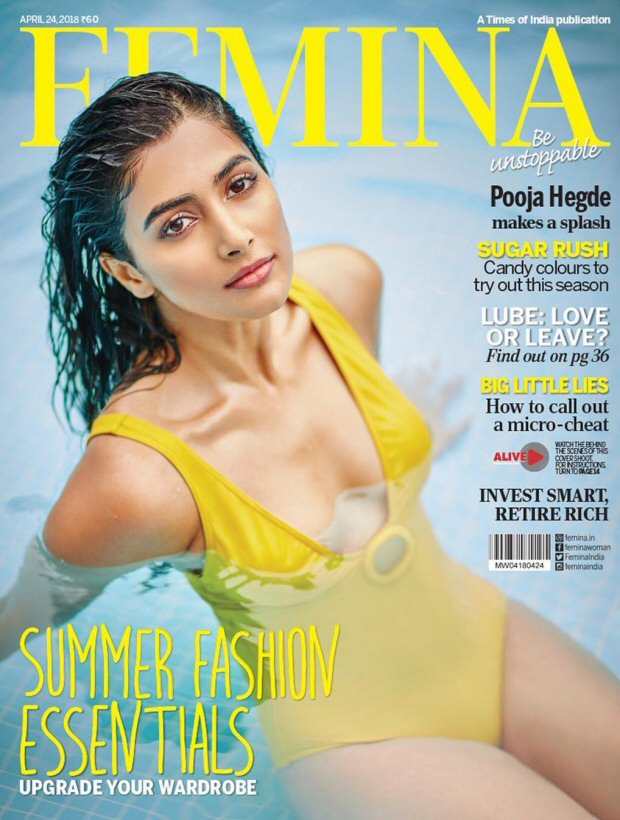 Our muse @hegdepooja is turning up the heat this summer! Swipe right for more

Pooja is every bit sensational on the cover and all the inside pictures of the magazine spread. For the uninitiated, Pooja has made it big in Telugu industry and is gearing up for her second Bollywood movie. She is slated to work opposite Baahubali fame Prabahs in a bilingual (Hindi and Telugu) movie. She has other two Telugu movies with NT Rama Rao Jr and Mahesh Babu. From Hindi films, her favourite is Yeh Jawaani Hai Deewani. She said like YJHD, she wants to do something young and fun. In addition to this, she is a huge sucker for Karan Johar’s movies and loves all the emotion, drama, romance in them. She aspires to star in one, someday.

Pooja also opened up about her debut film not working and how she dealt with failure with her first film. She said that she just allowed herself 15 minutes to cry and then bounced back to her work. She believes in putting her head down and working till someone notices her again. Well, we just hope she gets her big break in Bollywood soon. Till then, take a look at her amazeballs pictures and get summer ready.

Nargis Fakhri soaks in the sun in pink…