Amitabh Bachchan is busy promoting his first film of 2018, 102 Not Out which co-stars Rishi Kapoor. The actor is leaving no stone unturned in the promotions. The megastar began the promotional tour at his favourite game, cricket. The actor joined former Indian Cricket Team Captain Kapil Dev in a conversation about the on-going Indian Premier League (IPL). It was a sight to remember as the two legends from different fields showcased a cute banter during the conversation. 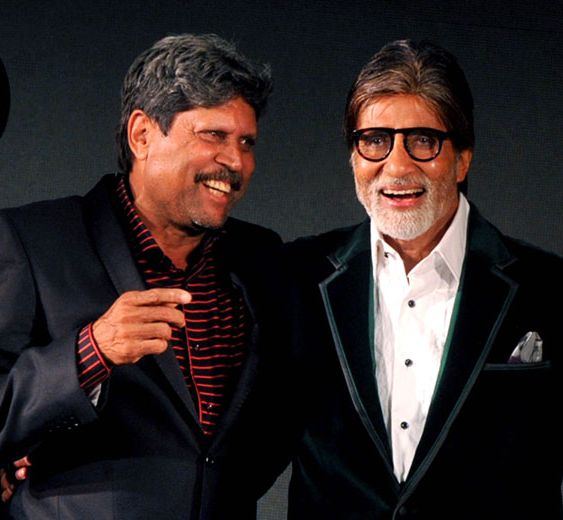 Amitabh Bachchan shared the teaser of the song 'Badoomba' from 102 Not Out which is sung by Amitabh himself during the IPL 2018 segment. This segment of IPL involved both the megastar and former Indian skipper talk about cricket and Bollywood. During the conversation, Kapil Dev said that he really does admire Amitabh Bachchan's discipline, dedication, and passion towards his profession. "Amitji has been an icon for generations and I admire his discipline, dedication and passion towards his profession till date," Kapil Dev said.

Amitabh Bachchan was seen with Abhishek Bachchan during the opening day of the Indian Premier League (IPL) 2018. The opening day match was between Mumbai Indians vs Chennai Super Kings. When quizzed about his favourite team, Amitabh Bachchan said, "Even though my roots are deeply embedded in Mumbai, I am a son-in-law of Bengal with a son who owns two teams, of which one is from Chennai and another from Jaipur and my daughter-in-law is from Karnataka. This leaves no room for favouritism when it comes to watching the IPL."

On the work front, Amitabh Bachchan was recently seen in a guest appearance in Akshay Kumar starrer Pad Man. The actor has almost wrapped up Thugs of Hindostan schedule. Big B will also be seen in Brahmastra starring alongside Alia Bhatt and Ranbir Kapoor. The film is directed by Ayan Mukerji and is slated to release on August 15, 2019. Amitabh Bachchan will be soon seen in Rishi Kapoor starrer 102 Not Out. Directed by Umesh Shukla, the film is slated to release on May 4, 2018.

Also Read: Amitabh Bachchan’s grandson Agastya to enter Bollywood but not as an ACTOR?