American singer Halsey (Ashely Frangipane) began her new year with the release of her third studio album, ‘Manic’. It was easily one of the most awaited albums of the year. The 25-year-old singer's album is very personal as she talks about relationships, personal struggles and not being angry anymore. The album has many collaborations including interludes from Alanis, Dominic Fike, and South Korean group BTS rapper Suga (real name Min Yoongi). 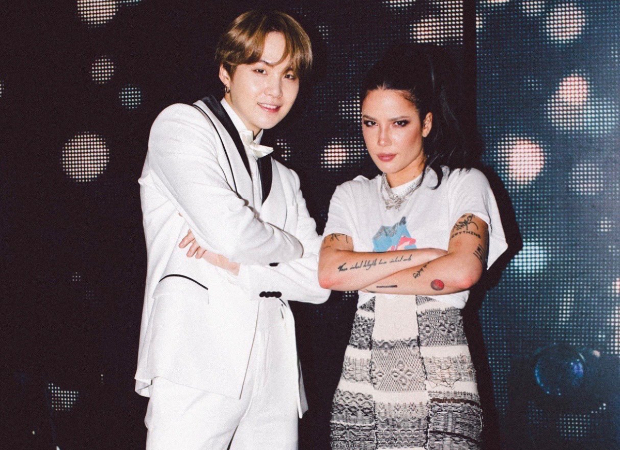 During an interview with Zane Lowe for Apple Music's Beats 1 Radio, Halsey explained why she decided to collaborate with Suga on this album. For unversed, the rapper's verses are in Korean. Halsey, who featured on BTS’ record-breaking song 'Boy With Luv' in 2019, explained that people would have expected her to collaborate with the leader of the group RM since they are close friends but she resonated with Suga's mixtape 'Agust D' and was moved by his lyricism.

She said, "I started exploring their solo music a little bit more, and with Suga, I got into 'Agust D', which is his solo project, and I was looking up lyric translations and I was blown away. I was like, 'This stuff is so introspective'. The content is about mental health and his inner turmoil, and he's a really quiet guy in real life, and I was just moved."

Halsey said that his music is introspective. She added, "RM, Namjoon and I, we're really good friends and you know, there are some of the other guys who have singing voices that are kind of similar to mine, that are airy and a little softer. And it's like, Suga probably was the last member of BTS that anyone would have expected me to collaborate with. He's the one whose lyrical approach I felt the most connected to. I knew I had to have him be a part of this record. I knew that he would get what it feels like to be manic, to be introspective."

.@halsey talking about meeting @bts_twt and working with yoongi ???????? pic.twitter.com/AesQpLmlwq

This ain't the first time Halsey has praised Suga's work. After she released her tracklist and Suga's Interlude was out, during her Instagram live, she said, "Yoongi’s like really introspective & really intelligent perspective on where we are & what we’re doing with our really unique lifestyles.”

Halsey talking about her ft. with yoongi in her Instagram live..! @halsey : "Yoongi’s like really introspective & really intelligent perspective on where we are & what we’re doing with our really unique lifestyles.”#suga #yoongi #halsey #JINDAY #HappyBirthdayJin #bts @BTS_twt pic.twitter.com/Aq1nd8JJOq

During one of the live chats with fans, Suga also revealed that he was surprised when Halsey approached him for a collaboration. "It was really fun to write,” he said. “I was like, ‘Why me? I’m not good at English. She said it was okay, and she asked me to do it in Korean. I wanted to thank Halsey for that, but I couldn’t when we met in the United States, because I’m not good at English.”

He further said, “That song was one that I’d written a while ago. I wrote the beat maybe the year before last. I gave her the beat that I’d written then, and we worked on it. It was originally more upbeat. As it was being arranged, it became more minimalistic.”

'Manic' album released on January 17, 2020, whereas BTS, that consists of seven members RM, Jin, Suga, J-Hope, Jimin, V and Jungkook, is currently gearing up for their comeback album 'Map Of The Soul: 7' due for February 21, 2020 release.