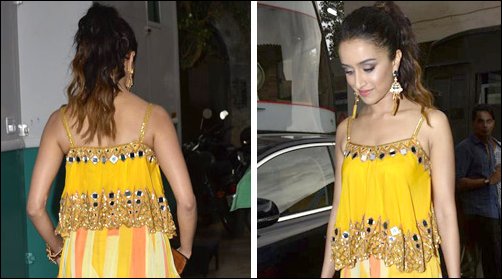 This is the time when the World Cup fever is it its peak. Even though India is out of the world cup, the fervor and the spirit is very much intact, same like Bollywood Hungama's most favourite section 'Guess Who', which is better known as 'World's Envy, India's Pride'.


This week's mystery guest is the daughter of an 'aaoo-tstanding' veteran actor, who has been sorely missing from the silver screens of late. Despite the fact that, this mystery guest's debut film sank without a trace, today, she is one of the leaders in the 'Numero Uno' race! She is one of the rare actresses today, who can not only act superlatively, but also has been gifted with the gift of the vocal cords. And those who have heard her croon (we think all of us), simply cannot stop praising her to the skies! And the last clue is that her 'dedication' towards her films is not just outstanding, but also exemplary.


If you think that you have Guessed Who this week's edition of 'Guess Who', then, Guess no further and simply post your answers in the comments section below: