The 77th Golden Globes took place on Sunday night at Beverly Hills, California. Joaquin Phoenix took home Best Actor - Drama award for his performance in Joker whereas Renee Zellweger won Best Actress - Drama for Judy. Brad Pitt won Best Supporting Actor for Once Upon A Time In Hollywood and Laura Dern took home Best Actress In Supporting Role for Marriage Story. Another important win of the night was the South Korean film Parasite winning Best Foreign Film award. Director Bong Joon Ho accepted the award and gave an inspiring speech with the help of his interpreter, Sharon Choi, who is an aspiring filmmaker. 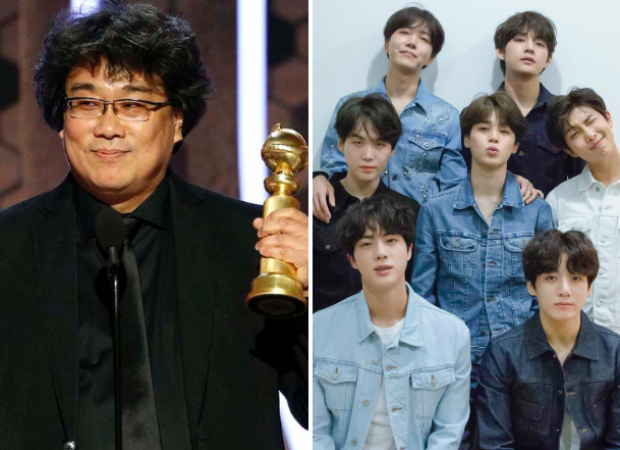 "Once you overcome the one-inch tall barrier of subtitles, you will be introduced to so many more amazing films. Just being nominated along with fellow amazing international filmmakers was a huge honour," he said in his speech. Ending his speech in English, Bong Joon Ho said, "I think we use only just one language: the cinema."

But, one thing that everyone has noticed during his US visit for Parasite promotions and award season that the filmmaker continues to shine light on how South Korean group BTS, now a worldwide phenomenon, has been culturally more influential than him. At the red carpet of Golden Globes 2020, Bong Joon Ho told eTalk, “Although I’m here at the Golden Globes, BTS has 3000 times the amount of power and influence that I have. I think Korea produces a lot of great artists cause we’re very emotionally dynamic people."

“Although I’m here at the Golden Globes, @BTS_twt has 3000 times the amount of power and influence that I have. I think Korea produces a lot of great artists cause we’re very emotionally dynamic people”—Bong Joonho at the #GoldenGlobes Red Carpet.pic.twitter.com/fkmDNiktgU