Last Updated 28.11.2021 | 10:45 AM IST
feedback language
follow us on
Bollywood Hungama » News » Bollywood Features News » EXCLUSIVE: “I’ve followed his work, and I’ve liked it” – director Ram Madhvani on wanting to do a comedy film with Kartik Aaryan before Dhamaka

Bollywood actor Kartik Aaryan is gearing up for his next project, Dhamaka, which follows the story of an ambitious ex-news anchor Arjun Pathak, who is given another chance to go live on prime-time television when a terrorist calls him with a bomb threat. Little does he know that this call will change his life and throw him into a fast-paced game of betrayal. The film, which will release on Netflix, is directed by Ram Madhvani. The filmmaker spoke to Bollywood Hungama exclusively to discuss the film at length, working with Kartik and more. 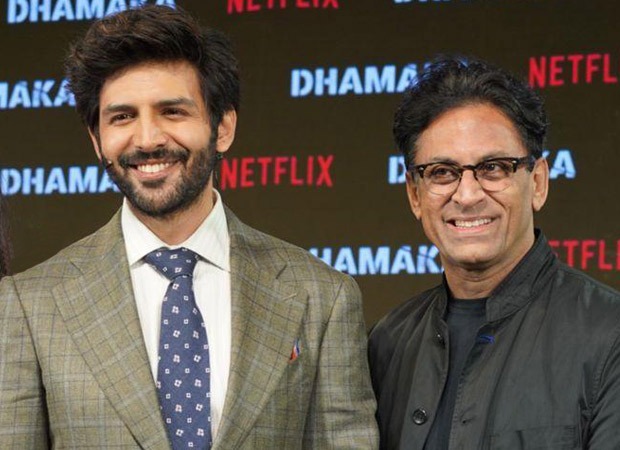 Speaking about the idea behind Dhamaka, Ram Madhvani says, "The idea was Kartik Aaryan. I've wanted to work with him for a while. I've followed his work, and I've liked the work. Over time, over the years, we've been wondering what to do together. One of them was a comedy film that was meant to do, in the conversations that we've had. And then one of the conversations that he had was, what about this [Dhamaka]? And I said, 'Yeah, well, why not?' And then it was something which I realized because the film is about a man who wants to be successful, there is nothing wrong with that we all want to be successful and a man who's an ambitious man, but what are the value systems? Like the song says at the end 'Kya Khoya Kya Paya', while trying to get ahead, what will you lose? What will you gain, and I think in all our lives, at whatever stage junior or senior, there is a price that you have to pay and decide whether it's with your time or with your family time, or sometimes it's also with your own soul and with your value systems."

He further adds, "Therefore, the Dhamaka in this film, is really not just the Dhamaka that is there, which is a physical Dhamaka but there is actually a symbolic and metaphorical Dhamaka, which happens to him, the lead character who is a grey character. And he falls and it's in a way a tragic kind of story because, in his life, there is a Dhamaka about truth, love, and life. So all of these dhamakas is really what the film is about. I would, therefore say, more than anything else, it's a human story. And that's what I was interested in. Just like Ninja is not a hijack story. It's a mother-daughter story. It's about a family who overcomes the loss of their child. And I think over here, it's about at what price success? At what price ambition?".

Dhamaka is a remake of the South Korean movie Terror Live. Talking further about the film, when asked how he came up with Arjun Pathak who is willing to cross the line for that one breaking news on primetime. Madhvani says, "Well, that character is there. And it's not about one story or anything, it's about any opportunity that comes in our life in whichever industry that you are."

He adds, "It could have been the stock exchange, a club, the film industry, and whatever, that those opportunities that come our way. And when that opportunity comes knocking our way as they do in your life, in my life and the people who are watching this, in their lives, in whichever world and whichever businesses that they do, when that opportunity comes, what are you willing to pay for it? And sometimes that price is something which may come in the way of your own upbringing, or what your parents taught you or what you were told on how to behave? Sometimes it even comes in the way of your own personal work-life balance. So those are all the things that we are constantly juggling with and dealing with. We're faced with an opportunity every day. So what will what price would you pay?"

Furthermore, he says, "I know that I've sounded flippant when I was answering it, but I didn't mean to sound flippant. It is really Kartik Aaryan. A lot of the power of where, the choices that he makes, that's his choice. I keep saying I'm not here, to sort of force you or make you decide anything; you have to decide. It's when you commit, it's when you decide or when you choose. When I see the commitment when I see that, okay, that's the way I'm going to work, etc. When he buys into it, that's when it's his purchase. It's not mine. Okay? So he has to agree and genuinely in the world that we are in the green lighting power is invariable with the actor, no matter at what level and stage of success you are in. I'm so happy that Amrutha Subhash said yes to this film because she could have said, no! I'm so happy Mrunal Thakur said yes to this film because they have the power to say yes or no, I don't have that power. I just have to go and ask. I wish I had the power to say yes or no, I don't. So I just want to put that on record to say, okay, they have the power."

Dhamaka is premiering on November 19, 2021, only on Netflix!