Last Updated 31.01.2023 | 6:03 PM IST
feedback language
follow us on
Bollywood Hungama » News » Bollywood Features News » EXCLUSIVE: “She is a benchmark when it comes to portraying a character” – says Taapsee Pannu about Supriya Pathak in Rashmi Rocket

ZEE5, Ronnie Screwvala`s RSVP & Mango People Media are all set to bring you an edge-of-the-seat, sports drama, Rashmi Rocket, headlined by Taapsee Pannu. Directed by Akarsh Khurana, the film will release on October 15. The film also stars Supriya Pathak who essays the role of Taapsee's mother. 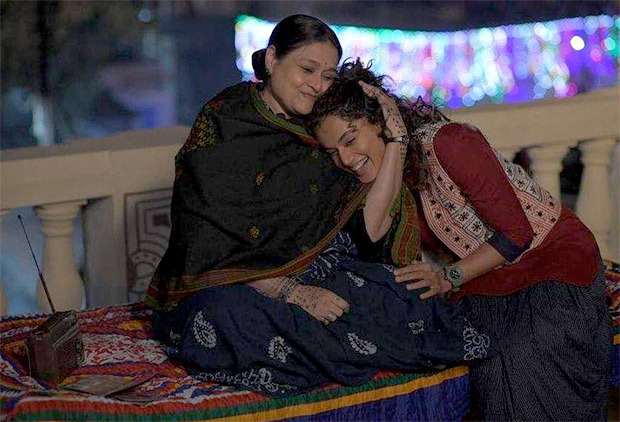 EXCLUSIVE: “She is a benchmark when it comes to portraying a character” – says Taapsee Pannu about Supriya Pathak in Rashmi Rocket

Talking about working with the ace actress, Taapsee says, "She is a benchmark when it comes to portraying a character that strong from this part of the country and I knew that I can only gain from being around her. I have always been very greedy for good actors around me because I feel they enhance my performance. So, I was very excited to know that she is going to play my mother because eventually, Rashmi’s character has to have a certain kind of pedigree for it to be the kind of character she is. So, Bhanubhen was extremely critical because people need to see Bhanubhen and understand where is this kind of upbringing coming from because Rashmi doesn’t learn things in life while she is at it, it's not like while you see her in the film grow is when she is learning the ways of being. She is the hero, she knows how to handle her life from the beginning of the film and that had to come from who Bhanubhen is, and Supriya Pathak embodied it perfectly, the kind of character we wanted her to."

Set in the salt marshes of Kutch, Rashmi Rocket is about a young girl from a small village, blessed with a gift. She's an incredibly fast runner who dreams of crossing the finish line. In the journey to fulfilling her dreams, she soon realizes that the race to the finish line is peppered with many hurdles, and what seems like an athletic contest turns into her personal battle for respect, honour, and even her very identity.

ALSO READ: “My father was the first one I called to check about gender testing in sports,” says Abhishek Banerjee who plays a lawyer in Rashmi Rocket