Filmmaker Karan Johar is back on the coffee couch! Season 7 of Koffee With Karan kicked off on Disney+ Hotstar with Rocky Aur Rani Ki Prem Kahani stars Ranveer Singh and Alia Bhatt followed by actresses Janhvi Kapoor and Sara Ali Khan as guests in the second episode. As the buzz around the show increases, the Koffee With Karan couch is set to sizzle with two of the biggest names in entertainment – Akshay Kumar and Samantha Ruth Prabhu. The episode's teaser hints at a lively potboiler of glamour, secrets and witty one-liners delivered by the two celebrated guests. 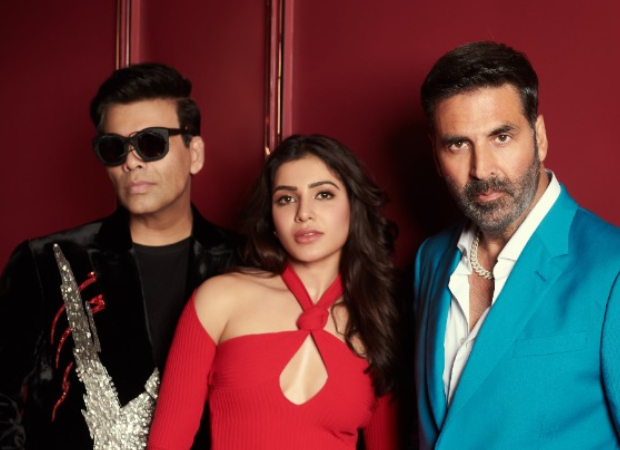 In an exclusive interview with Bollywood Hungama, Karan Johar said that the upcoming episode will be a blast. "Akshay is a lot of fun and  he comes alive with the guest. We've had Akshay with Tina (Twinkle Khanna), his wife and it was a riot. We've had him with Ranveer Singh and it was a riot. Trust me, his episode with Samantha Ruth Prabhu is another riot."

ALSO READ: Koffee With Karan 7: Samantha Ruth Prabhu says she would invite only Ranveer Singh to a bachelorette, leaves Akshay Kumar and Karan Johar in splits