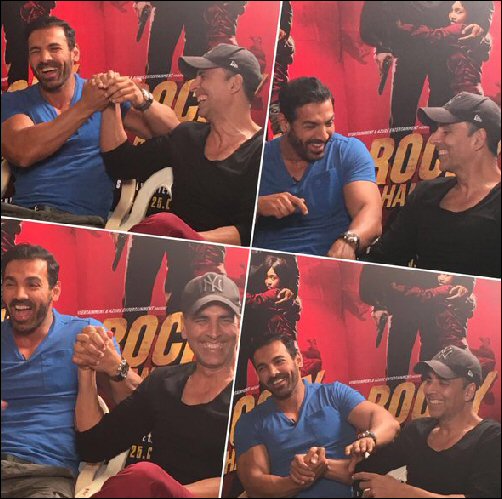 'Desi Boys' John Abraham and Akshay Kumar share a great rapport and everyone is aware of it. Their on-screen chemistry is definitely a result of their budding bromance off screen and when John Abraham recently dropped by the sets of Akshay's wife Twinkle's ad shoot to meet Akshay and his wife, he received a warm welcome from the latter. John also took to Twitter to talk about his friendship with Akshay Kumar.


Though John Abraham is fairly active on social networking sites, we have rarely seen the actor acknowledging or talking about personal relationships. However, after he recently caught up with Akshay at a suburban studio in Mumbai, John took to Twitter to share the collage of their on the sets 'masti' saying, "My guru ji who has stood by me always ... Love you @akshaykumar!!!" In response to the same, Akki too said, "@TheJohnAbraham love you too brother!"


Besides the fact that Akshay Kumar and John Abraham have done a few films together (Garam Masala, Desi Boyz and Housefull 2), the latter has replaced our Bollywood Khiladi in two sequels Welcome Back and Hera Pheri 3 which had Akshay as the leading man in their first installments.