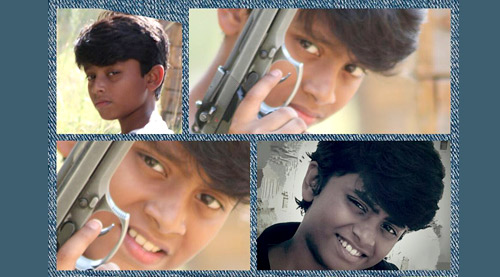 It isn't rare to have children of celebrities make an appearance in a film of theirs. The biggest example of that is producer-director Sajid Nadiadwala's son Subhaan who has acted in his Mujhse Shaadi Karogi, Heyy Babyy, Housefull and Housefull 2. Many years back Hrithik Roshan too had acted in dad Rakesh Roshan's Bhagwan Dada. As for Rishi Kapoor, he made his debut as a teenager in Mera Naam Joker where he played the younger version of his dad Raj Kapoor.

Now Krish, 12 year old son of producer-director Anand Kumar, has joined the fray as well. He would be seen as the younger version of one of the lead protagonists, Akhil Kapur.

"The film is an action-drama set in Kanpur and revolves around two children who work in a pistol factory. One of them is Krish who grows up to be Akhil Kapur while the other one is seen in a senior avtar as Jay Bhanushali," informs our source, "Anand was looking for someone who could look convincing as a kid who was a little rough and had the makings of being a goon as he grew up. He didn't have to look around much as the actor was right at home with son Krish filling the slot."

Of course Anand auditioned the boy to ensure that he indeed carried off the part well. After all, there is considerable amount of screen space that both kids enjoy and Anand didn't want the love for his to impact a rational decision making.

"While I was relieved when he passed the audition, I was also amazed to see the kind of talent he carries," says a proud father, who has worked with men like Sanjay Dutt, Vivek Oberoi and Arshad Warsi in the past (Zila Ghaziabad), "The role really required the boy to play tough and had to be comfortable in his skin as a youngster who would soon turn out to be a sharp shooter with passing of some years. I can say that as Pali, he has done a damn good job. The kind of transition that happens on screen from younger to senior version of Pali is so convincing."

What was also supposed to be convincing was the love story that builds between - hold your breath - the boy Krish and Tia Bajpai, who plays eight years his senior.

Our source adds, "The film has that strong angle of this boy falling in love with Tia, who plays the mistress of a villain's henchman. There is this tender feeling of love that seeps in and when the boy grows up, he saves Tia from the clutches of the henchman and goes on to marry her."

While the adults are said to be in the middle of a subtle-and-silent romance, one waits to see how 12 year old Krish manages to carry off a part that requires him to bring in all shades of being a ruffian, a true friend and a romantic!