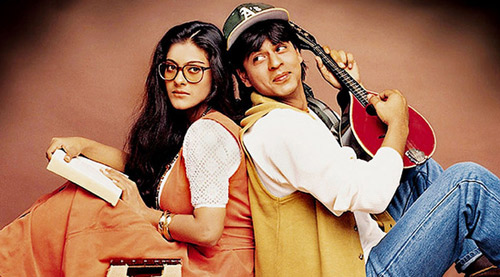 It is going to be 1000 week celebration for Dilwale Dulhaniya Le Jayenge tomorrow. Oh yes, Shahrukh Khan and Kajol have regaled in this Aditya Chopra starrer for this long! After all, when it comes to the sound of 'dhol' and 'nagaada' in a Bollywood film, it has to be a Yash Raj outing. Right from Daag to Shuddh Desi Romance, Chopras have never let the audience down when it comes to marriage celebrations or the life and times of married couples. Ok, so in Dilwale Dulhaniya Le Jayenge, Raj and Simran were never really shown to be married. However, with the lady in 'shaadi ka lehenga' and the man stretching his arms to take her on a journey of happiness and together, the message was loud and clear.

Here is looking at 10 other films that had 'shaadi' playing a very important role.

This has to be a film with maximum footage dedicated to weddings, with the only irony being that no marriage actually takes place during its entire run time of the film. First it is Sushant Singh Rajput who breaks off his marriage with Vaani Kapoor and later Parineeti Chopra does the same with Sushant. Oh yes, they do live happily ever after but garlands are never quite exchanged - a first for a Yash Raj film.

Continuing their non-conformist approach, Chopras explored an untouched subject, that of a man falling in love with his brother's fiancÃ©e. It could have gone totally haywire, if not for the light hearted treatment that was meted out by first time director Ali Abbas Zafar. With Imran Khan, Katrina Kaif and Ali Zafar coming with a believable act, audience didn't quite mind this 'shaadi' which broke quite a few norms.

With a title like this, it was imperative that this would be a film that would have band, baaja and baaraat aplenty. That was the case too for this Maneesh Sharma directed film where the very subject demanded pomp and show of festivities running on screen right through. As for the lead couple, it was always going to be about time when they took 'saat pheras'. It happened too with the call of all is well that ends well.

Seldom does one see an actress being so disappointed when getting married to Shahrukh Khan on screen! This was the case though for first timer Anushka Sharma who found herself exchanging garlands reluctantly with her nerdy husband at the film's beginning. Aditya Chopra went reverse by making the couple fall in love after getting married and their honeymoon video came only in end credit rolls.

One of the most popular commercial films exploring the theme of live-in relationships, Saif Ali Khan and Preity Zinta brought good freshness on screen when they went all around Australia saying 'Salaam Namaste'. With none really uttering the 'marriage' word, all seemed well. However, and as is expected eventually birth of a baby brought them together and soon it was time to propose marriage.

They could well have got married in the first few minutes of the film. After all, Saif Ali Khan and Rani Mukerji looked so good together, despite an occasional 'nok-jhonk'. However, a Yash Raj film needs to have its element of drama which means the couple separated, only to meet again after the death of Rani's husband (Abhishek). It was a process of wooing all over again before rings were exchanged.

If Mere Brother Ki Dulhan was about a man falling in love with his brother's fiancÃ©e, Mere Yaar Ki Shaadi Hai was about a man (Uday Chopra) going all out to stop the marriage of his friend (Tulip Joshi) who was getting married to another man (Jimmy Sheirgill). The film had stage set for extended wedding celebrations and there were usual 'chacha-chachi', 'mama-mami' and uncle-aunty involved in this frothy affair.

Think Chandni and the sound that instantly reverberates is that of 'Mere Haathon Mein...'. Every wedding celebration since then has seen the song being played in the 'ladies sangeet'. The film though had its tragic elements involved with Rishi Kapoor and Sridevi not meeting initially. However, Yash Chopra wanted to bring back love in cinema and eventually united the two despite Vinod Khanna entering the scene.

Comprising of two marriages that made one wonder how exactly the love stories would eventually blossom, Silsila was more in news for the real life references it brought on screen than the core theme itself. With Amitabh Bachchan-Jaya Bachchan as one couple and Sanjeev Kumar-Rekha as another, there was stage set for all the drama. However, instead of a wedding song, it is 'Rang Barse' that rules till date.

Daag: A Poem of Love

Released more than four decades ago, this is the mother of all marriages that Bollywood has seen ever since then. Reason being that Rajesh Khanna was married to not one, but two women in the film. With Sharmila Tagore and Rakhee for company, it dealt with the social taboo of bigamy. Of course, the refrain here was about the hero being 'halaat se majboor' but it was rather bold of Yash Chopra to go for it.