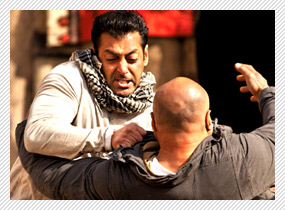 Salman Khan isn't planning playing a 'Bade Bhaiyya' or a lover boy for some more time at least. Instead, he is happy to be taking the action

route, despite the fact that his neurological illness is yet to be entirely cured. Now the clear mandate for all his directors is to devise action of various kinds so that they

don't seem repetitive in his next three films, each of which is an action affair.

"Salman is now a part of international style action in Ek Tha Tiger. Since he has been exposed to something like this, he wants the best of both worlds - class as

well as mass - for each of his subsequent films. This has already been taken care of in Dabangg 2 and now makers of Sher Khan and Kick have a

task cut out for them. They have to be imaginative and bring something different in each and every action sequence."

This would also mean that if one counts Bodyguard as an action movie, Salman would have five back to back films with heavy dose of action films. Now to make it

all look different is no less a challenge for the technical team.

"For Dabangg 2, it is still relatively sorted because as a character, Chulbul Pandey has a way to deal with the bad guys. However, Sher Khan and

Kick bring Salman in contrasting setting. While former is said to be an adventure film which would have a lot to offer to the kids, latter is a quintessential action

thriller designed on the lines of Dhoom series", our source adds, "This means that while Sohail Khan would be bringing 'desi' action in Sher Khan, Sajid

Nadiadwala and Shirish Kunder are hiring services of foreign action directors for Kick and would be filming in Korea."

Guess it may be well deserved rest for Salman when he is through finishing these films and then step into the far more cozy world of Sooraj Barjatya soon after.