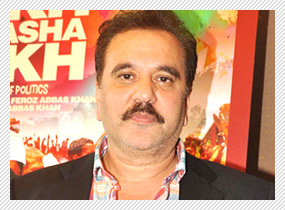 From a rather serious and somber Gandhi My Father, filmmaker Feroz Abbas Khan is now taking a satirical route with Dekh Tamasha Dekh. Ready for a year and traveling the festival circuits, the film is now all set to release this election season.

"In fact the film revolves around this guy who is crushed under the hoarding of a politician (played by Satish Kaushik). What happens afterwards is the core of the film. It is all treated in a very fun and humorous way though, despite a tragedy beginning it all," says Feroz, "Moreover, when there is a revelation made towards the end of the film, you will be completely surprised and stunned. There are going to be unexpected reactions."

There was some drastic reactions en route release of Gandhi My Father too, which had to face some protests owing to its content centered on the personal life of the Mahatma. Later, post the release of the film, even though there were good reviews came in, commercial successes evaded the Anil Kapoor production.

"I am sure that if Gandhi My Father releases today, it would be a big hit. But then I am not a person who likes to speculate about future while thinking of the past. I am happy though that today anywhere in the world it is considered as a companion of Richard Attenborough's Gandhi. It is shown all over the world on satellite network. It is in the library of history, politics and sociology in universities around the world. Cambridge has called it one of the best authentic pieces on Gandhi. What more would I want? Commerce isn't everything," reasons Feroz.

Now that his second directorial outing (which is produced by him along with Sunil Lulla of Eros) is all set to hit the screens, Feroz is happy to be getting into an out and out commercial zone while making a sensible film that would make many a head turn.

"The film is something that you haven't expected; I can promise you that much," he says, "You would continuously want to know what's going to happen next. The film is entertaining, engaging and surprises with many twists and turns. Moreover, there is going to be a fabulous end to the whole brouhaha on screen. There are so many bizarre things happening in India. It is just that even if we see them all around us, we just accept it as normal. This 'tamasha' is what turned out to be the genesis of Dekh Tamasha Dekh. It is the kind of film that I had wanted to make for a very long time and I finally got an opportunity to do so."

With a running time of just about 100 minutes, the film releases next Friday.

SEVENTEEN confesses their feelings in 'Ready…