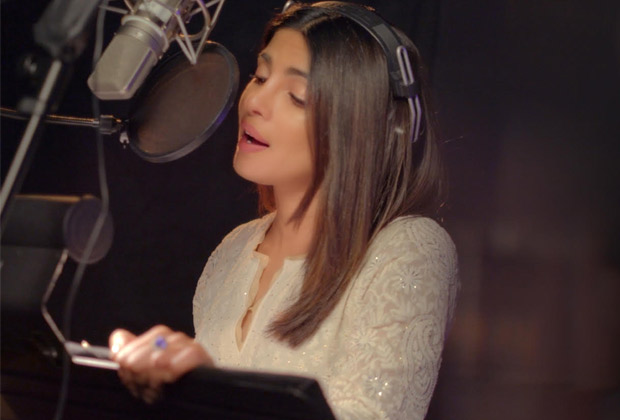 Priyanka Chopra’s fans have a reason to rejoice. India's global superstar has recorded a promotional track in Marathi for her debut Marathi venture Ventilator produced by her production house, Purple Pebble Pictures, written and directed by Rajesh Mapuskar and presented by Zee Studios.

Besides singing the soul-stirring number ‘Baba’, dedicated to her late father Dr. Ashok Chopra, the international icon will also feature in the promotional track which was shot in New York recently where she's currently shooting Quantico 2. Director Rajesh Mapuskar, along with the team of the family entertainer, flew to New York to shoot the video, conceptualized and directed by Ms. Maheep Dhillon with an American crew.

Priyanka says, “From the minute, I heard the song ‘Baba’, I loved it. It’s so powerful and moving, capturing the relationship between a father and his son. When the music directors Rohan and Rohan suggested that I sing a female version of this, I was apprehensive and torn between my love for the song and nervousness of singing it in Marathi. But I’m so glad I did finally sing it because it was a fun, enriching, terrifying, and amazing experience for me and I can’t wait to do it all over again! I hope I’ve been able to do justice to this beautiful song. Forgive me if there are any mistakes. I sang it with all my heart."

"When music composers Rohan Rohan came to me with a very simple, warm composition – ‘Baba’ - I never thought it would travel across continents to get completed. It's recorded in the ultimate city of the US, New York. Thank you Priyanka for your initiative to make the song sound so wonderful,” adds Rajesh Mapuskar.

Ventilator is a fun family fiesta featuring a sterling ensemble cast including veteran Marathi film and theatre actors, and the promotional track will stay true to its theme. Produced by Purple Pebble Pictures and presented by Zee Studios and directed by Rajesh Mapuskar, Ventilator is scheduled to release on November 4, 2016.