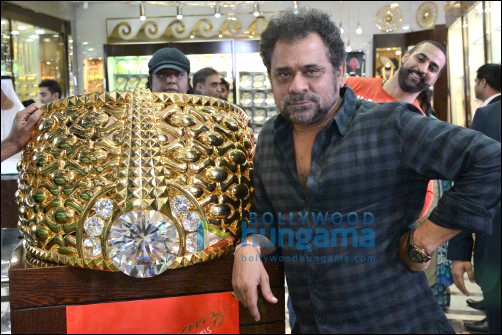 The Anees Bazmee directorial Welcome Back which was slated to release by the end of 2014, has been delayed to mid 2015 owing to some changes. The film, which has been extensively shot in Dubai, is considered to be more lavish compared to the first installment Welcome and now we hear that, in order to add to the grandeur, Welcome Back will have a scene featuring the world's largest ring.


According to Guinness Book Of World Records, this diamond studded ring weighs 64 kilos, and has been safely placed in one of the shops at Dubai's gold market, guarded by tight security. Talking about it, Anees mentioned that even for the shooting of Welcome Back, they had to complete the scene in one day since the area was highly populous, after which, they ensured that the ring has been placed once again in its safe and secured locker. Apparently, the scene in question has Anil Kapoor gifting this 64 kg ring to his lady love in the film.