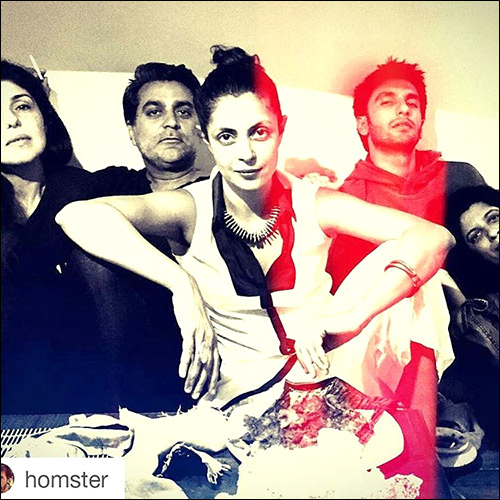 Ever since Dil Dhadakne Do, it seems that Ranveer Singh shares a rather special bond with the Akhtars. The actor, who has just returned from Paris, made sure to catch up with them at Zoya Akhtar's residence a few days ago.

Giving us a glimpse of this happening house party, Ranveer took to Instagram to post pictures along with the hosts of the night and their friends. Ranveer Singh was seen hanging out with co-actor Farhan Akhtar who too was sporting a new hairdo. While Ranveer's new look is for the upcoming romantic drama Befikre, Farhan's hair style is for Rock On! sequel.


Ranveer Singh, post his little break, will soon resume the schedule of the Aditya Chopra directorial Befikre alongside Vaani Kapoor. On the other hand, Rock On 2 has already gone on floors and the team has even completed shooting some major portions of the film. While Befikre is slated to release on December 9, Rock On 2 will release on November 11.