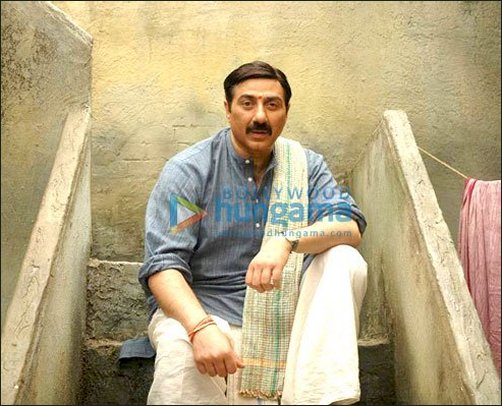 It's really nice to know what success does to people. After the success of films like Damini, Ghayal the proverbial 'dhaai kilo ka haath' only became more and strong with every passing film.

But the BO results of the latest blockbuster Yamla Pagla Deewana have changed it all. The 'dhaai kilo ka haath' image has now given way to a very soft spoken Sunny Deol, who is now all set to play the role of a ... hold your breath... a Sanskrit teacher!

No wonder then, Sunny has started 'sporting' a dhoti, the tikka and the moustache these days. The film is called Mohalla 80 and is being directed by Chandraprakash Dwivedi, who shot to overnight fame with the television series of 'Chanakya', followed by the film Pinjar.

Sunny Deol, for whom learning Sanskrit has become a priority, expressed his desire to Bollywood Hungama that his dream role was that of his father Dharmendra's Satyakam. Sunny is confident that Mohalla 80 will prove to be a Satyakam for him.

The said film is slated for an August 2011 release.